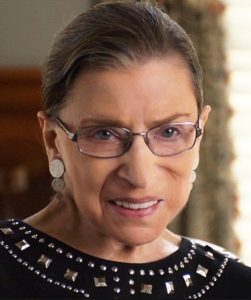 Ruth Bader Ginsburg is 85-years-old.  She’s served on the United States Supreme Court since her confirmation in 1993.  While receptive to humor, she rarely makes a joke herself.  She’s considered serious and studious by those who know her.  She doesn’t engage in small talk; her discourse and exchange is straight to the point.  She’s not flashy, and refuses to draw attention to herself.

So why, at this late stage in her career as a ground-breaking female attorney and judge, is Ruth Bader Ginsburg so popular?  She’s a pseudo Rockstar to the millennial generation.  She’s parodied on “Saturday Night Live.”  She’s known by her initials, R.B.G.  She’s known as the Notorious RBG – a play-on-words of the late rapper The Notorious B.I.G.

Newcomer filmmakers Betsy West and Julie Cohen attempt to learn the answer in their documentary “RBG,” which became one of the big hits at this year’s Sundance Film Festival.  Via interviews with family members, close personal friends, and professional acquaintances, West and Cohen paint a picture of an understated but driven woman who obviously had the smarts (attending Harvard for two years, then graduating from Princeton School of Law), but was unable to immediately find work in the male-dominated legal profession.

Standing up for equality

Having experienced this discrimination at a young age, Bader-Ginsburg devoted her life to standing up for equality.  And not simply bigotry against women.  She won a U.S. Supreme Court case for the first time when she defended a man who was unable to collect spousal survival benefits because he was a father rather than a mother.  During the 1970s, she won five of the six cases she defended before the U.S. Supreme Court.

In 1980, President Jimmy Carter nominated Bader-Ginsberg to the U.S. Court of Appeals for the District of Columbia Circuit.  In 1993, President Bill Clinton nominated her to the U.S. Supreme Court, where her opinions (and, more recently, her dissents) continue to advocate for across-the-board equality.

And lest we become too comfortable in our belief that much discrimination has been outlawed over the course of her long career, West and Cohen highlight a recent Court decision against a woman who discovered she was the victim of pay discrimination at her place of work, but apparently after the statute of limitations had expired – causing the Court’s conservative majority to rule in favor of her employer.  Finding this result absurd, Bader-Ginsburg’s stinging dissent resulted in congressional passage of the Lilly Ledbetter Fair Pay Act of 2009.

“RBG” concludes that it’s this constant and unwavering pursuit of equality that has made Bader-Ginsburg a superstar during her octogenarian years.  She has been portrayed as both Batgirl and Superwoman in pop art.  Her speaking schedule dwarfs those of any other Supreme Court justice.  She had a bit role in a New York opera two days after Donald Trump was elected president (to spoof his insistence that Barack Obama was not born in the United States).

At a time in which Nazis and the Ku Klux Klan feel empowered, Americans want to know someone (heck, anyone) is working for equality for all.  Bader-Ginsburg has fit that description since the 1950s.  She is the real deal.  And we are a better country for her efforts.

“RBG” will play in select theatres throughout the country, although unlikely in Indianapolis.  Instead, look for it on CNN, as it is a product of CNN Films.  This is a documentary that deserves to be seen.