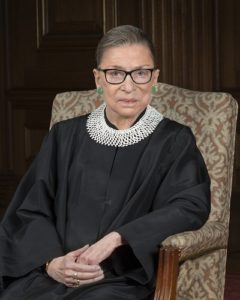 In 1972, future U.S. Supreme Court justice Ruth Bader Ginsberg and her husband Marty argued the landmark Moritz vs. Commissioner of Internal Revenue before the U.S. Court of Appeals in Denver, which effectively ended legal discrimination based on gender.  The odd twist to the Moritz case was that Mr. Morris was a man.  Prior to 1972, courts had upheld existing law that discriminated against females, but this case involved a man unable to claim the so-called “caregiver deduction” because he was male.  Moritz was a bachelor who quit his job to care for his aging mother, assuming he could claim the deduction – but he was denied because that deduction was meant for females.

Ginsberg had faced institutional discrimination from her days as one of just nine incoming female freshmen at Harvard Law School in 1956.  Graduating at the top of her class, Ginsberg was unable to land a job at any of the top New York law firms, and eventually accepted a position as a law professor at Columbia.  This case thrust her into the spotlight, and became the first of several sex discrimination cases Ginsberg argued all the way to the U.S. Supreme Court. 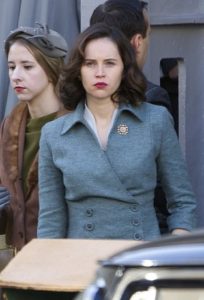 Mimi Leder’s new film “On the Basis of Sex” follows Ginsberg’s career from her early days at Harvard through the Moritz case – and while it doesn’t break any new cinematic ground (never veering from “mainstream”), it is heartening to see hard work and persistence pay off for one of the groundbreaking attorneys of our time.  Coming on the heels of the 2018 Ginsberg documentary “RBG,” I can’t say I learned anything more from Leder’s film than from “RBG;” nor can I say I necessarily prefer to re-watch one over the other.  Both pictures paint Ginsberg as a champion of those who have faced gender discrimination – and she certainly is – but neither digs particularly deep beneath the surface.  “On the Basis of Sex” is a crowd-pleaser, but it’s a fairly by-the-numbers biopic. 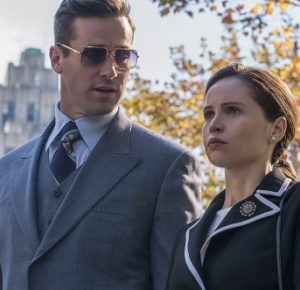 Felicity Jones, so great as physicist Stephen Hawking’s wife in “The Theory of Everything” turns in an excellent performance as the serious and driven Ginsberg.  Armie Hammer plays husband and fellow Harvard Law student Marty Ginsberg.  As “On the Basis of Sex” opens, the Ginsbergs enter law school already married and with a baby.  Talk about a juggling act.  And when Marty suffers his first bout with cancer, Ruth attends not only her own classes, but also his – all while raising a child.

During the years of the Moritz case, that baby is teenage student and future legal scholar Jane Ginsberg (played by Cailee Spaeny), who follows the case with keen interest.  Justin Theroux plays ACLU attorney Mel Wulf; and in a twist so ironic it seems as though it were written specifically for this movie, Ginsberg’s old Harvard law professor Erwin Griswold (Sam Waterston) represents the IRS in the Moritz case.  This is the professor who asked each of the nine incoming law school females to explain to the class why on earth they would want to become female attorneys.  Now he faces one of those female students in a groundbreaking discrimination case.

Issues with the film

A little too much time is given to the inner-workings of the case preparation.  I would have preferred Daniel Stiepleman’s original screenplay concentrate more on the courtroom proceedings – and follow the case all the way to the Supreme Court, as opposed to ending the film at the Court of Appeals.  And while I realize “On the Basis of Sex” is based on reality, I did feel as though the screenplay placed a few too many obstacles in the way of Ginsberg’s success – the high-power legal team of the opposition, the skeptical Appeals Court judges, the Ginsbergs’ poorly-organized opening statements, and so forth.  A little of that goes a long way.

If I had to compare “On the Basis of Sex” to another recent offering, I believe I’d liken it to “Marshall,” Reginald Hudlin’s 2017 film about an early race discrimination case argued by future U.S. Supreme Court justice Thurgood Marshall.  In both instances, the future high court justices (Ginsberg and Marshall) are painted as perfect.  I realize these are American heroes, but surely Ruth Bader Ginsberg and Thurgood Marshall must have had a character flaw or two.  Unfortunately, these biopics place their subjects on such high moral pedestals as to render them unrelatable to the average moviegoer.  And that’s a bit of a shame, considering the films’ intents.

Still, “On the Basis of Sex” is a good and decent film about a living American champion of justice.  Again, it’s a crowd pleaser; audiences will leave the theatre feeling good about all that is American.  And though this film breaks no new ground (either cinematically or in our understanding of Ruth Bader Ginsberg), there’s nothing inherently wrong with making us feel good.