Back in the glory years of the Rock ‘N’ Roll Top 40 era, singers and bands would release “greatest hits” albums – compilation records (or tapes, or CDs) consisting of just a couple or three cuts from a variety of albums.  This was enough to wet the proverbial whistles of fans – but the net result was these anthologies caused listeners to pine for the original albums from whence the individual songs were culled. 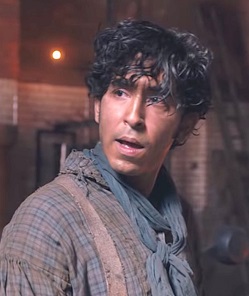 Initially, I had a similar feeling upon watching Armando Iannucci’s “The Personal History of David Copperfield.”  Iannucci and fellow screenwriter Simon Blackwell tear through the early material of the classic Charles Dickens novel with such lightning speed, I began to question whether or not I had taken a bathroom break.

Young David is taken from his home at a young age to live with his nanny and her family in a boat house on the beach.  But no sooner do we settle in to the dynamics of this setting, David returns home only to be whisked off to work in the sweatshop of his evil stepfather Mr. Murdstone.  During this time, David lives as a lodger in the cramped apartment of the Micawbers – constantly pursued by the creditors they are unable to pay.  Perhaps Murdstone set up this living arrangement to illuminate to David the perils of slacking off at work.

But we’ll never know, because the screenplay soon has David (now played as a young adult by Dev Patel) pursuing the estate of his wealthy aunt Mrs. Trotwood (Tilda Swinton) and her companion, Mr. Dick.  Next, it’s off to boarding school, where David meets young compatriots and falls in love.  And all this plot development occurs within the first 45 minutes.

Now we all know nothing is more excruciating than a slow-moving period piece, but “The Personal History of David Copperfield” is certainly not cut from the same cloth as the Merchant Ivory productions of the 1980s and ‘90s.  It’s important to note that Iannucci also directed the 2017 spoof “The Death of Stalin” – a biting satire which also progressed at a very quick clip.  The pacing was not as obvious in “Stalin,” due to the shallower depth of the material.  In a Dickens interpretation, we expect a certain deliberate rate of movement – one that Iannucci never fully settles into, although the early scenes are the most briskly timed. 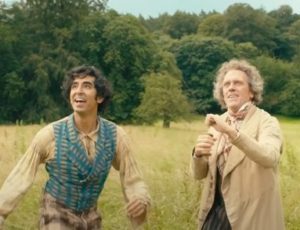 Once “Copperfield” finds its step, the result is a delightful rags-to-riches-to-rags-to-riches tome we can’t help but enjoy – even if the early scenes are jarringly abridged.  “Copperfield” takes off during David’s Trotwood Estate years, particularly in his relationship with the quirky Mr. Dick (an excellent Hugh Laurie), who believes he has taken on the personal baggage of King Charles I – beheaded some two centuries prior to the setting of the Dickens novel.  David’s ingenious method of relieving Mr. Dick of his burden brilliantly foreshadows his later success as a writer.

The boarding school years are also enticing (and not nearly as rushed).  This sequence is chock full of some of Dickens’ most colorful characters – including the perennially drunk Mr. Wickfield (Benedict Wong), his daughter Agnes (Rosalind Eleazar), the scheming fellow student Uriah Heep (Ben Whishaw), and David’s daft girlfriend Dora (Morfydd Clark).  Wong and Clark are hilarious, but Eleazar plays Agnes too contemporary for the time period.  It’s as though she’s acting in a different film.

But I must give Iannucci credit for his casting choices.  While none of us ever pictured David Copperfield looking anything like Dev Patel, the decision to utilize his talents in the lead role is somewhat a stroke of genius.  Patel plays Copperfield with such a sense of earnestness that we accept the arrangement almost from the get-go.  Other characters have parents or children of dissimilar races.  And it works!  Heck, if we accept Charlton Heston as Moses, there’s no reason not to populate Dickens’ work with actors who might not seem physically right for the roles.

All the loose ends (and most of the novel’s primary characters) are reunited or revisited during the denouement.  This literary technique always serves to tie up loose ends.  But here, it also reacquaints us with the characters of the early, hurried scenes – making them seem less pressed and driven.  In other words, the ending softens the blow of the exhausting beginning.

Save for the rushed origination sequences, “The Personal History of David Copperfield” is a pleasure – and a great reason to return to the cinema following the long Covid-19 layoff.  I shouldn’t need to mention this, but please wear a mask.  Theatre ushers are likely to require it when patrons are not eating, and remember that you are protecting other guests.