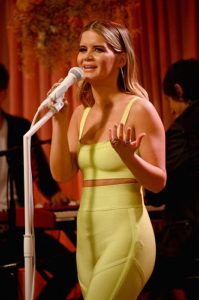 Grammy-winning artist Maren Morris will embark on “RSVP: The Tour” throughout North America, including festival dates at Governors Ball Music Festival and Jazz Aspen Snowmass Labor Day Experience and headline stops in Los Angeles, Chicago, Boston, Colorado’s storied Red Rocks Amphitheatre, and many more. The tour kicks off in June following her headlining appearance at the Houston Rodeo on March 7, her biggest show to date. The tour will make a stop in downtown Indianapolis on Saturday, August 8, 2020 at The Amphitheater at White River State Park with special guests Ryan Hurd and Caitlyn Smith.

2019 was a monumental year for the singer songwriter who took home Album of the Year at the 53rd Annual Country Music Association Awards, where she was the most nominated artist.
Her record-shattering album GIRL continues to receive widespread critical praise—Variety hailed it as “the best as well as most important mainstream country-star album of the year.” GIRL was also featured amongst the Best of 2019 by Rolling Stone, Billboard, Esquire, GQ, People, Vice, Paste, Stereogum, and Uproxx.

Tickets for “RSVP: The Tour” go on sale to the public on Friday, March 6 at 10am local time.  Visit www.citientertainment.com.