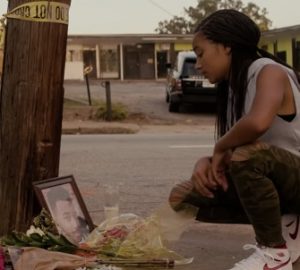 I fear George Tillman Jr.’s “The Hate U Give” is a film likely to fall through the cracks during this year’s Oscar race – and that’s a shame, for it is one of this year’s best pictures.  Audrey Wells’ screenplay is adapted from Angie Thomas’ 2017 novel of the same name, which centers around a high school girl who is the only witness to a police shooting in which a white officer kills an innocent, unarmed black man.

Now before you can say, “I bet I know exactly where this story is going,” be advised that you do not.  “The Hate U Give” is a richly layered film, exploring an all-too-common phenomenon from many angles.  Starr Carter (played by Amandla Stenberg, in one of this year’s best performances) lives in a fictitious poor black neighborhood known as Garden Heights.  Her dad Maverick (Russell Hornsby) is a former gang member who served three years for a crime he did not commit.  Maverick took the fall the gang’s leader, King, in exchange for his being allowed to leave the gang upon his release.

Now clean and free from gang activity, Maverick operates a corner convenience store in Garden Heights.  He and his wife Lisa (Regina Hall) send their kids to Williamson Prep, a private school in a neighboring suburb.  Most of Starr’s school friends are white; her neighborhood friends are black.  Starr’s voice-over narration explains that she lives in two worlds, and that she is essentially two different people, depending on her circumstances.

As “The Hate U Give” opens, Maverick shows his young kids how to cooperate and put their hands on the dashboard if they should ever be pulled over by the police – a lesson Lisa believes to be over-the-top, but one Maverick feels is necessary.  Years later, Starr is attending a party in Garden Heights where she meets up with a lifelong family friend named Khalil, played by Algee Smith (from Kathryn Bigelow’s “Detroit”).  Although he’s become trapped in the drug-selling trade, we get the sense Khalil is a good kid at heart, and he certainly treats Starr like a young lady.

When shots are fired off camera, the party disperses, and Khalil offers to drive Starr home.  When he fails to signal a turn, a white police officer stops the car and Starr’s hands immediately go to the dashboard.  Although not rude, Khalil challenges the officer’s motives, and is eventually asked to exit the car.  When the cop is running his driver’s license, Khalil reaches back into the car for his hairbrush.  The cop assumes the brush is a gun, and you can practically write the remainder of this scene. 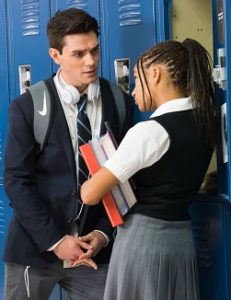 Starr’s school friends are unaware that she is the only witness to the crime, and this is the point at which “The Hate U Give” gets interesting.  Very interesting.  First, Starr’s white boyfriend Chris (KJ Apa) can’t understand why Starr is being so evasive – particularly with prom coming up.  Second, Starr’s friend Hailey (Sabrina Carpenter) doesn’t understand why Starr can’t sympathize with the white cop who killed Khalil.  Hailey comes across as racist, but she makes a worthy point that such an ordeal must be tough for the family of the police officer, forced to make a split-second decision on a dark night in which it was difficult to discern a hair brush from a gun.

On prom night, Starr brings Chris inside to meet her family.  In the film’s funniest scene, Maverick mistakes Chris for the limo driver.  In disbelief that his own daughter could possibly have a white boyfriend, Starr gently explains that Chris has more in common with Maverick than he realizes.

In one of the film’s most poignant scenes, Chris tries to explain to Starr that he doesn’t see color when he’s with her.  Starr replies that he must see her color, because her blackness is so much a part of who she is.

One of year’s best performances

Eventually, Starr must come clean and expose herself as the witness to Khalil’s shooting death.  She allows herself to be interviewed by the local media, and to testify before a grand jury.  She also speaks out at a peace rally following Khalil’s funeral.  Stenberg effectively walks the fine line that is Starr’s character – and again, this is one of the year’s most outstanding performances.  If Stenberg is not nominated for a Best Actress Oscar, there is something wrong with the system.

One of year’s best films

In a way, “The Hate U Give” picks up where Paul Haggis’ “Crash” left off 14 years ago.  That film ended with a white cop killing an unarmed black man.  “The Hate U Give” begins with a similar scene, and follows the residual action accordingly.  There’s a lot going on in this picture, and it’s immediately on my list of the year’s best films.

“The Hate U Give” is every bit as strong as Spike Lee’s “BlackKklansman,” but since it takes place in today’s world, there is a greater sense of urgency.  While Lee does an excellent job of tying his 1972 story to today’s political climate, Tillman doesn’t have to make such a connection.  “The Hate U Give” could happen (and is happening) any time and any place.  And by examining these police shootings in great depth, Tillman has created a modern-day classic.  This is a film that begs to be seen by everyone.  My only hope is that it will be.