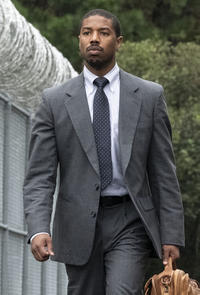 Walter McMillian is a black man – an independent contractor incorrectly convicted of the murder of a young white woman in 1990s Alabama.  Idealistic Delaware attorney Bryan Stevenson has come to the Deep South to advocate for prisoners just like McMillian – those wrongly accused, who have no sense of hope of ever having their convictions overturned.  Theirs would appear to be a match made in heaven – or at least in motion picture heaven.

Not as strong as “Clemency”

Although a true story, the plot pieces seem to fall together almost too easily in Destin Daniel Cretton’s “Just Mercy,” another late 2019 film you may have missed.  Although it played at the Keystone Arts Cinema for several weeks this winter, the coronavirus outbreak provides us the opportunity to catch up with some of these sleeper films.  Unfortunately, “Just Mercy” hit at the same time as the superior “Clemency,” in which Alfre Woodard stars as the warden of a high security prison, whose life has been radically changed by her association with Death Row.

“Just Mercy” is also about Death Row, but here the story focuses on Attorney Stevenson and his attempts to right the wrongs of black men in the American South.  His journey takes him to the Equal Justice Initiative, a non-profit he founds to provide legal representation to prisoners who may have been wrongly convicted.  Again, McMillian provides the perfect plot point for Cretton’s and Andrew Lanham’s screenplay, adapted from Stevenson’s own memoir.

Unlike in “Clemency,” where each character is infused with a certain depth, here we’re presented with a bevy of characters who seem to be plucked from Hollywood stock characters we’ve known since the 1950s.  Stevenson is the idealistic lawyer – reminiscent of Sidney Poitier’s Virgil Tibbs in “In the Heat of the Night,” or Gregory Peck’s Atticus Finch in “To Kill a Mockingbird.”  (And, as a side note, the screenplay never passes up the chance to remind us that Monroeville, Alabama – where “Just Mercy” takes place – is the birthplace of “Mockingbird” author Harper Lee.)

While the Stevenson character can seemingly do no wrong, the corrupt sheriff, the district attorney, and the judge can seemingly do no right.  Their characters exist merely to represent a corrupt judicial system – but they have no depth beyond the fact that they are presented as evil villains. 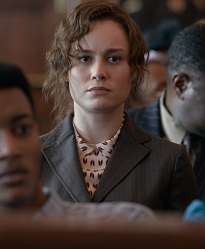 Jamie Foxx is excellent as McMillian.  Even though his character is a “good guy,” he at least has the minor flaw of having had a couple scrapes with the law in his past.  So, while wrongly convicted, we know he’s at least not perfect.  Foxx’s performance is so strong we wonder why we don’t see more of him.  After all, he won a Best Actor Oscar for his dead-on portrayal of Ray Charles in 2004’s “Ray” – a feat which typically leads to a plethora of complex roles.  He’s either turned down a lot of offers, or Hollywood stopped calling for some reason.

Michael B. Jordan is good in an understated performance as Attorney Stevenson.  He’s forced to work hard to garner McMillian’s support (the prisoner’s outlook having been tarnished by lackluster representation by too many state-appointed lawyers in the past).  But once he finds himself in his client’s good favor, he seems to cruise through the rest of the film on autopilot.  Oscar-winner Brie Larson (“Room”) is Monroeville native Eva Ansley, who helps Stevenson with the Equal Justice Initiative and acts as his personal secretary.  It could have been a juicy role, but she isn’t given much to do.

The only character who doesn’t seem plucked from Hollywood stock is that of Ralph Myers (played by Tim Blake Nelson), a convicted felon who was coerced into testifying against McMillian in exchange for a lighter sentence.  We know Stevenson will have to work to get Myers to re-testify, but Myers turns out to be no idiot.  Nelson waivers between coming forth with the entire truth versus only that which might help the McMillian case.  His is one brain we see actually working in “Just Mercy.”  The others seem to exist merely in service of a plot – which is in service of an overarching idea:  that a black man can’t get a fair shake in the Deep South.

While this may be true in large part, “Just Mercy” doesn’t challenge us beyond our already pre-conceived notions of Southern justice.  Once we see where the screenplay is going, we can almost write the remainder of the script.  Save for one jarring courtroom scene (in which Myers almost loses the case), “Just Mercy” remains on autopilot for its duration.

No compelling reason to see it

“Just Mercy” could have been an important film – like “Clemency.”  Or “In the Heat of the Night.”  As it is, there’s nothing particularly wrong with it.  But there’s no reason to recommend seeing it either.