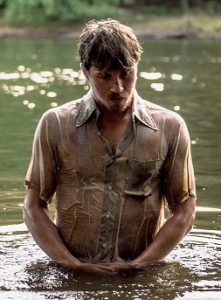 Mike Burden is an orphan raised by the Ku Klux Klan in small-town South Carolina.  With job opportunities limited, Burden works as a repo man, confiscating automobiles and electronics from townsfolk, including some with whom he went to school.  He sympathizes with his victims (or customers, if you will), but he has a job to do.

One day, Burden takes a liking to a young lady whose television he’s just repossessed.  She’s a single mother named Judy, and the two of them seem to hit it off well.  Burden particularly bonds with Judy’s son, taking him to the NASCAR race, teaching him to fish, and so forth.

But there’s one sticky issue for the young couple.  You see, Judy’s son plays with a young African-American boy whose father Clarence was a classmate of Mike’s.  With Mike’s involvement in the local KKK, he’s soon forced to choose between the woman he loves and the group of brothers to whom he owes his allegiance.

This is the set-up for “Burden,” based on the true story of Mike Burden’s difficult decision.  Choose Judy, and the Klan will seek revenge.  Choose the Klan, and he’ll lose the potential love of his life.  It might not seem like a brain-teaser for many of us, but the Klan’s ties run deep in the South – even as recently as 1996, the setting for this story.

Directed by newcomer Andrew Heckler, “Burden” stars the very capable Garrett Hedlund in the title role.  Hedlund has been around awhile, but this is his first major starring role.  He has the insecure bluster of an uneducated working-class repo man down so well that it often doesn’t seem as though Hedlund is acting.  Andrea Riseborough plays Judy, and singer Usher Raymond is Clarence. 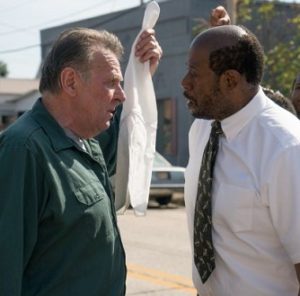 In a prominent side story, the Klan is renovating an old movie theatre into a museum celebrating their heritage of white supremacy.  The local black community, under the tutelage of local pastor David Kennedy, holds daily peaceful protests at the new museum.  When Mike and Judy lose their jobs and resort to sleeping in the car with her son, Reverend Kennedy offers them a room in his house – much to the consternation of his wife and teenage son, who are well aware of Mike Burden’s background.

Still, Kennedy believes there’s always hope for redemption, and the admittedly awkward arrangement leads to some post Civil Rights tension in the small rural community.  As Kennedy, Forest Whitaker turns in another of his many admirable performances.  British actor Tom Wilkinson is daunting as Tom Griffin, the longtime leader of the local Klan movement.  He’s the man who has treated Burden as a son all these years – a role now filled by his archnemesis, Reverend Kennedy.

“Burden” has the makings of an interesting story, and I’m not about to tell you it isn’t.  But Heckler’s original screenplay suffers from being so very (no pun intended) black and white.  It’s obvious which side 99.99% of viewers will take when watching any story about the Klan, but Heckler seems intent on searing the notion of good vs. evil into our hearts and minds.

For example, I’m certain the real Reverend Kennedy must have a character flaw or two.  And even though he’s a ruthless Klan leader in the 1990s, Griffin must have possessed at least one admirable character trait.  Unfortunately, we are not privy to such blurring of right and wrong.  All the facts, including character development, are laid out for us as though we’re not smart enough to discern any subtle differences between good and evil.

Wilkinson is a great actor, but his Tom Griffin is evil personified.  He’s playing a caricature more than he is a well-developed character.  Same with Whitaker.  As Mike Burden, Hedlund has the pivotal role here.  His is the character who must make a heart-wrenching decision, and potentially change his entire way of thinking.  But even that scene plays out like it was written by a film school student.

Contrast “Burden” with the superior “Dallas Buyers Club” from 2013 – in which Matthew McConaughey’s character only sympathized with the plight of his AIDS patient customers after he had cashed in on a get-rich-quick scheme to sell them much-needed medication that had not yet been approved by the FDA.  In “Burden,” there’s no such sympathy with African-Americans, per se.  Yes, Mike Burden eventually becomes friends with many of the congregants of Rev. Kennedy’s church.  But the impetus for his conversion is merely a romantic relationship.

Could have been much more

Again, “Burden” is not a bad film.  But it could have been so much more.  By manipulating our every thought about every character and every decision, Heckler snuffs out our opportunity to decide for ourselves how to think about what we’re watching on screen.  We’re “guided through” the material, rather than simply presented the material.  Not allowed to think freely, we’re held hostage to the views of the filmmakers.  That’s a shame, given the fact that the premise of “Burden” is a quite interesting story.