“The Paper Dreams of Harry Chin” at IRT 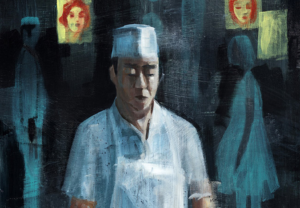 Despite the US ban against Chinese immigrants, Harry Chin forged a new identity to earn precious American dollars to send home to his starving village. Now he is trapped between two families and two worlds. Seasoned with magic and mystery, this hauntingly theatrical tale from our overlooked history considers the personal and political repercussions of making a group of people illegal.

From the Artistic Director

“The Paper Dreams of Harry Chin is a beautiful play skillfully woven from the story of a man who immigrated to the United States in the 1930’s despite the Chinese Exclusion Act. Watching the play is like putting together an elaborate puzzle as Chin’s journey unfolds through striking flashbacks and memories. Playwright Jessica Huang has vividly illuminated with great care a period of our American history often intentionally under examined. It is a timely piece that asks us to think deeply about our current immigration policies and how our ancestors gained access to the land we live on.” –Benjamin Hanna, Associate Artistic Director

APPROXIMATE RUN TIME: 2 hours and 15 minutes, including a 15-minute intermission

The Paper Dreams of Harry Chin is a family drama that contains profanity and references to suicide. Recommended for patrons 9th grade and above. Due to content and length, children under 4 years of age are not permitted in the OneAmerica Mainstage and Upperstage Theatres.