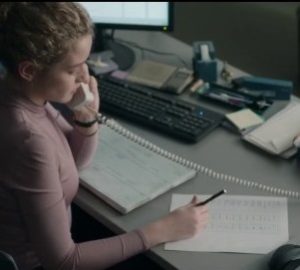 The assistant is played by Jennifer Garner.  She doesn’t have a name.  Doesn’t need one, really.  She’s the proverbial low man on the totem pole.  Been at her job a couple months.  Comes in early.  Goes home late.  Prepares the coffee pot for the office staff.  Cleans up the leftover donut mess after a meeting in the boss’ office.  Spends a half hour on the phone making hotel and flight reservations for the boss and a couple others to visit the company’s west coast office.  And she does all this without a shred of recognition or compliment.  In fact, when she screws up, she writes the boss an apology e-mail, assuring him the infraction will never occur again, and expressing her appreciation for her job.

Kitty Green’s latest film, “The Assistant” would appear to be a sympathetic nod to all those unsung office workers who “keep America working.”  And it certainly begins as such.  But “The Assistant” soon becomes so much more.  Green’s original screenplay follows the nameless assistant through the course of exactly one day.  One winter day in the cold, dark office headquarters of a major Hollywood studio.  The boss (also unnamed) is the catalyst who sets all the action (such as it is) into motion.  We never see him, but we know whether he’s in his office or out – based on office chatter, the open or closed door, and often simply by watching Garner’s facial expressions.

How far down?  She engages in office chitchat with the two young men who share her immediate office space.  But most others in the large company walk through the elevator doors in front of her – perhaps unknowingly, but perhaps due to some unspoken hierarchy amongst office personnel.  She does her job well, receives no accolades, and doesn’t appear bothered by this set-up.  After all, she’s working for a studio, and likely earning more pay than she would at a similar corporate office.  She probably has hopes and aspirations for something greater, but those dreams remain unspoken – and since nobody engages her in any personal discussion, she never has a chance to share them.

Then mid-morning in “The Assistant,” a pretty young lady shows up at the office, and the assistant must drive her to the swanky Manhattan hotel where the boss has secured a room for her.  During the short commute from the office to the hotel, we learn this newcomer (Kristine Froseth) is a waitress from Boise, met the boss at some kind of function, and managed to secure an entry-level position – even though she possesses no marketable skills.

Upon returning to the office, the chatter now centers around the boss’ absence.  The speculation is that he is at the same hotel as the newcomer.  It is at about this point we realize the boss is quite likely disgraced Hollywood mogul Harvey Weinstein.  And then the inevitable comparisons begin.  The comparisons between this film and “Bombshell,” Jay Roach’s recent indictment of dishonored former Fox News CEO Roger Ailes.  Both pictures are about corporate leaders who abused their power and traded sexual favors to advance women up the corporate ladder.  But that’s where the similarities end.

In “Bombshell,” screenwriter Charles Randolph didn’t trust his audience to connect all the dots.  So, he did it for them.  When Charlize Theron (as newscaster Megyn Kelly) turns to the camera in an early scene to explain something about Ailes to the viewer, “Bombshell” loses its credibility as a serious expose of corporate abuse, and can subsequently never rise above the level of “cartoonish.”  “The Assistant,” with its contrasting lack of dialogue (particularly explanatory dialogue) trusts its viewer to connect the dots by himself.  Green’s screenplay is smart.  Randolph’s dumbs down to accommodate the low expectations of the masses.

Unfortunately, “The Assistant” will be nowhere near the box office hit “Bombshell” was.  Word will get around that “nothing happens” in “The Assistant.”  In reality, nothing could be further from the truth. 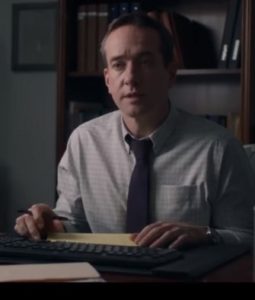 In the film’s greatest scene, the assistant meets with the (again nameless) head of human resources, played by British actor Matthew Macfayden.  She begins by sharing her evidence – line item by line item, instance by instance – as the HR director warmly and methodically disputes each one.  He’s too smart to argue her points; after all, he’s been around long enough to know how the boss operates.  But he causes the assistant to realize all she has are loose disjointed observations, none of which can be proven.  His parting advice is for the assistant to be thankful she holds a position for which he’s received 400 resumes within the past week.  It’s a humbling scene, and one that would have been out of place in “Bombshell,” but would have earned that film some respect.

I also like the way “The Assistant” is a film about the assistant.  It’s not about anybody else, really.  She’s in every scene.  The camera is almost always focused on her.  This structure forces us to view the boss through the eyes of the lowest person on the corporate ladder.  Whereas “Bombshell” quickly introduced us to multiple important characters, “The Assistant” focuses on exactly one.

Again, “The Assistant” will not resemble anything close to a box office success.  But it begs to be seen by as many viewers as possible.  Not only is it a far superior film to “Bombshell,” but it serves as a wake-up call to corporate leaders who treat their subordinates as something less than human.  Remember, it was the revelations of Weinstein’s character that started the #me-too movement.  While “The Assistant” never mentions names, it’s humbling to see how difficult it was for such a movement to take hold in a corporate environment where such abuses have likely occurred, unchecked, for many years.