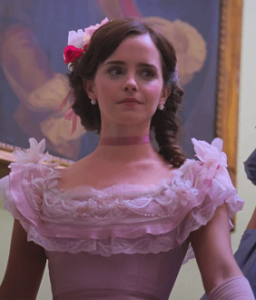 Louisa May Alcott’s 1869 novel “Little Women” has always lent itself well to the medium of film.  To wit, no fewer than seven big-screen versions have been produced over the years.  Two were silent.  Other notable adaptations starred Katherine Hepburn and Elizabeth Taylor.  My favorite was Gillian Armstrong’s 1994 interpretation, which starred Winona Ryder in the lead role as the moody and brilliant Jo March – second oldest of four daughters growing up in Massachusetts during the Civil War.  Armstrong’s translation was warm and fuzzy, yet practically burst off the screen with a vibrancy sometimes missing from filmed renderings.

Now Greta Gerwig’s rendition hits theatres, and it too is an affectionate variant on the timeless classic.  This time Saoirse Ronan lends her enormous talents as the spirited Jo – a role she seems born to play.  Determined to succeed as a writer, Jo March (a character Alcott based on herself) spends a good portion of her youth writing down her analysis of the events in her life.  Fortunately for young Jo, her life is full of notable occurrences.  She has three sisters and a big-hearted mother who never misses an opportunity to teach her girls the value of sharing their abundance with those less fortunate.

Emma Watson plays the beautiful and approachable eldest daughter Meg, Eliza Scanlan is the ailing Beth, and Florence Pugh is Amy, the “baby” of the family.  Each of the girls possesses an artistic talent.  Jo is the writer, of course, while Beth excels at music, Amy is a painter, and Meg possesses many capabilities.  Gently guiding the March girls through their adolescence is their mother Marmee, played by the versatile Laura Dern.  Marmee must act as mother and father while Mr. March (Bob Odenkirk) is away at war. 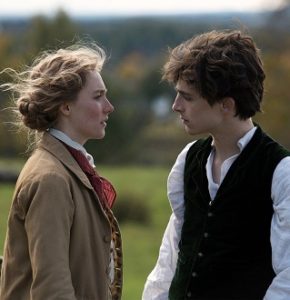 As the girls wend their way through preadulthood, they begin to notice the young men of Concord, one of whom happens to live in the estate next door.  His name is Teddy Laurence, but everyone refers to him as Laurie.  Played by the adaptable Timothee Chalamet, Laurie takes an early interest in Jo, but has feelings for several of the March girls.  Chris Cooper plays his widowed father, who admires all the March girls – particularly Beth, who revels in playing the late Mrs. Laurence’s piano for Mr. Laurence.  Meryl Streep is humorous as Aunt March, the family matriarch who never misses a chance to advise her young nieces to marry into wealth.  And Tracy Letts is hilarious as the book publisher more interested in sales than in brilliant writing.

It’s a wonderful cast of characters, and it’s always a delight to see new film variations.  Gerwig’s is certainly one of the best, and, coupled with her 2017 classic “Lady Bird” (which also starred Ronan), firmly establishes her as one of our brightest young filmmakers.  I foresee Gerwig having greater success as a director than as an actress.  As she did with “Lady Bird,” she is also credited with writing the screenplay.

My only complaint with Gerwig’s “Little Women” is the back-and-forth jumps in time – particularly in the film’s first half.  There are times when flashback sequences are practically required – such as in the recent picture “The Report,” in which 2002 and 2003 scenes of CIA torture of Muslim and Arab informants is vital to our understanding of the 2014 and 2015 congressional investigation into systematic persecution.  Here, the sudden time period swings serve no dramatic purpose.  As Armstrong showed us in her version, there’s no reason not to tell this story in a lineal fashion.

Eventually, Gerwig settles on a straightforward narrative; and when she does, her characters sparkle.  But the first third of “Little Women” is sometimes difficult to follow.  If nothing else, the actresses don’t look different enough in the flashbacks to help us identify whether we are watching them in Civil War times or before.  Flashback scenes can be confusing, particularly when overused, and I wish Gerwig had embraced a straight, successive telling of this story.

Still, “Little Women” is a fine film – engaging, and sympathetic.  It’s a showpiece for some of our finest acting talent, and it stands as the second-best modern interpretation of this ageless tale.  Look for Ronan, and perhaps Chalamet and Pugh at Oscar time.