Last time Terrence Malick made a film with some semblance of a plot, you’d have to go clear back to his 1998 Pacific theatre World War II flick “The Thin Red Line.”  Since then, his output has been operational, but his recent work has trended toward the meditative and away from coherent story lines.  That changes with Malick’s latest effort, “A Hidden Life.” 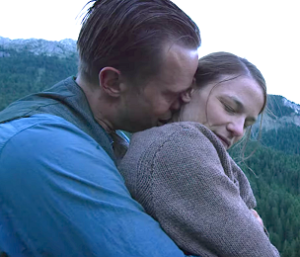 Franz and Fani are a young, happily married farming couple living in the mountains of Austria at the dawn of World War II.  Conscripted into basic training, Franz (German actor August Diehl) leaves his wife, three young daughters, mother, and sister-in-law to tend to the farm.  Following the surrender of France to the Nazis, Franz is sent home to a warm welcome from his family and tightly knit farming community.

But when the war effort ramps up again, Franz begins to have second thoughts.  He simply does not agree with the German cause – considering the Nazis to be the enemy of the countries they continue to invade and occupy.  After stewing over his conscience, Franz makes a decision which will haunt him and his family for years.  He simply decides not to take up arms on behalf of Hitler, nor will he sign his allegiance to the Nazi party.

The advice of others

Others try to talk Franz into serving.  His local priest and regional bishop invite him to consider the backlash Fani (Austrian actress Valerie Pachner) and the girls will receive from townsfolk.  His attorney nudges him to sign his dedication to the Nazi cause anyway – as he would at least know in his heart that he disagrees with their beliefs.  Eventually captured by German military authorities, Franz is sent to prison with (presumably) others who refuse to adhere to Nazi ideals.

As Franz wrestles with his decision, a good portion the action, such as it is, of “A Hidden Life” is advanced by the ethereal voice-overs of Franz and Fani – their letters to one another, and to God.  This is a technique Malick has perfected over the years, although it seems to make more sense here than in any of his projects since “The Thin Red Line.”  Franz is maddeningly silent when authorities inquire about his resistance.  Instead, we are privy to his innermost thoughts through the reading of his letters.

Although “A Hidden Life” is Malick’s best film in 20 years, if I could fault it at all I would first cite Franz’ silence when pressed for explanation of his defiance.  With his life (and the future of his family) on the line, one would hope he would share his thoughts and beliefs with those able to spare his life.  He doesn’t.

Sure, we get some archival footage of Hitler speaking to large groups of marching soldiers, but some early scenes of mistreatment of Jews or the invasion of Warsaw would have gone a long way toward cementing Franz’ decision.  I’m not calling for blood and guts (which certainly don’t belong in such a celestial film as this.  But we need to feel Franz is making his choice for a logical reason.  By the end of this overlong picture, we begin to wonder why our protagonist doesn’t simply sign his allegiance anyway – knowing in his heart that he will never support Hitler.  The longer Franz keeps up his defiance, the more the advice of others makes sense. 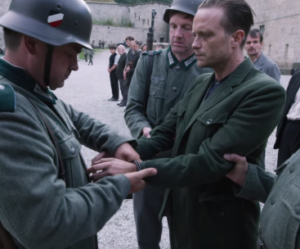 An interesting directorial choice of Malick’s is to present some of the dialogue in German, without subtitles.  This occurs when Franz is being interrogated and at his trial before the Nazi authorities.  My presumption is that we know how these scenes are going to play out; that the conclusion is foregone.  Therefore, rather than burden us with the dialogue, we see the scene with our eyes while our minds fill in the blanks.  It’s a clever method of re-focusing our attention back to the voice-over thoughts and letters of Franz and Fani.

“A Hidden Life” is a sad film, often flashing back to scenes of the three young daughters as Franz wrestles with his internal demons.  He is to be commended for second-guessing an establishment whose values do not mirror his own.  But the consequences of his actions (or lack thereof) are so severe as to cause us to wonder why he continues to resist.  Does he really want to condemn his daughters to growing up without a father?  Because Dad so rigidly held to his beliefs?

It’s quite a conundrum, and Malick does an excellent job of showing us all sides of Franz’ internal struggle.  But alas, I wonder if he couldn’t have given just a little – to preserve his family and provide for the future of his children.  At first, I presumed we were to cheer Franz’ decision, but Malick causes us to wonder if self-righteousness is not always the correct path.  From that perspective, “A Hidden Life” is a great film.  In practice, the end result is just a bit lacking.  I respect what Malick is trying to do, but I was a little underwhelmed by the finished product.