One of the unwritten rules of filmmaking is that one should never make a motion picture about World War I.  There was one great WWI movie, 1929’s Oscar-winner “All Quiet on the Western Front.”  But that was released not only before World War II, but even before Adolf Hitler came to power in Germany.  Since WWII, the best war pictures have all dealt with “the big one.”

Why is that?  Well, the firepower was greater in WWII.  There were tanks, a more sophisticated air war, and an entire Pacific theatre absent from the first world war.  Furthermore, the older confrontation featured a lot of trench warfare, which doesn’t lend itself well to the big screen.  Still, many directors have tried (and typically failed) at making an excellent WWI film.

Until now.  British director Sam Mendes turns in one of this year’s gems with his sweeping WWI epic “1917,” in which he liberally borrows a page from the Steven Spielberg playbook – tell a small, personal story against the backdrop of a large event.  I’m thinking here of the story of a German businessman who employed Jews from the nearby concentration camp to operate his factory during the Holocaust in “Schindler’s List.”  Or the story of an army officer tasked with rescuing the last surviving brother from behind enemy lines in “Saving Private Ryan.”

In “1917,” Mendes (and fellow screenwriter Krysty Wilson-Caims) relate the story of two young British soldiers charged with delivering a handwritten message from a general to the front-line colonel about to embark on a certain-death mission against the German army.  You see the Germans have retreated, moving the front further back into German territory.  Intelligence shows this ploy is a trap.  The colonel falls for the trap, and is preparing to launch a full assault against the German army – a move which, unbeknownst to him, will result in hundreds, if not thousands, of casualties.

The German retreat, to the so-called Hindenburg Line, was the brilliant strategy of Operation Alberich, a military maneuver executed in Northern France during the winter of 1917 – before the Americans had even joined the war.  The soldiers, Schofield and Blake, are played by relative unknowns George McKay and Dean-Charles Chapman.  Affable and eager, the young actors display a sense of righteousness coupled with a pragmatism that endears us to them almost from the get-go.  We don’t know why General Erinmore (Colin Firth) has chosen them, but they assume the challenge with appropriate reservation to counter their eagerness to please the army brass. 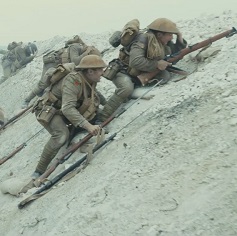 As Schofield and Blake first set out on their seemingly impossible mission, our perception of “1917” is that our takeaway may be nothing more profound than “War is hell.”  And how many films have demonstrated this adage?  But it doesn’t take long to realize Mendes is aiming higher with this project.  “1917” could have been made about any war in any time period.  The satisfaction of experiencing this film is the brotherly bond between two young men who likely haven’t known one another for long, but who will do anything to protect and defend one other.  Such is the way of war.  The obligation to country (and, by extension, countrymen) is strong enough to overcome any obstacle.  And the two protagonists never lose sight of the goal of freeing France (and all of Europe) from an aggressive power.

Yes, “1917” is the best WWI picture in 90 years.  But more importantly, it’s probably the best war film in general since “Saving Private Ryan” in 1998.  This is a large-scale production, featuring a largely unknown cast, which shows us both the horror of war and the incorruptible affinity of humanity.  The travails of our heroes lead us to an abandoned but booby-trapped German bunker, a destroyed bridge over turbulent waters floating with dead bodies, and a chilling encounter with a French girl caring for an abandoned baby in the burning remains of her former city.

One of this year’s best

“1917” holds our interest throughout its efficient two-hour running time, and never fails to pull just hard enough on our heartstrings without becoming maudlin or overly idealistic.  It’s Mendes’ best film since his 1999 Oscar-winner “American Beauty,” and it should be a part of this year’s Oscar consideration.  It’s not the greatest war movie ever.  I can probably count a dozen I’d rank above it if given a few minutes.  But it’s the best to come along in many a year – and I’m including last year’s “Dunkirk.”

“1917” is a moving and poignant film, told on a grand scale by a seasoned filmmaker.  It ranks as one of this year’s cinematic achievements.