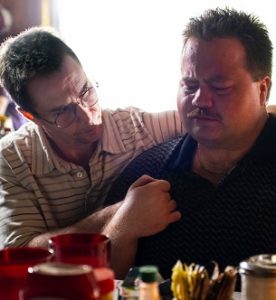 In 1996, a bomb went off in a public forum during the Atlanta Olympics.  Security guard Richard Jewell was immediately credited with discovering the bomb and commencing the evacuation procedure that undoubtedly saved lives.  But within a few days, Jewell was being questioned as the FBI’s top suspect.

Why would a security guard plant a bomb then “discover” it and work tirelessly to evacuate hundreds of partygoers?  The FBI had a theory that Jewell fit the stereotype of a loner who longs to be the hero; a man who has spent his life on the cusp of a career in law enforcement, but who still hasn’t made it into that world.  Everything about Jewell’s life seemed to fit the mold.  He lived with his mother.  He collected firearms.  He didn’t have any close friends.  Yes, Jewell could be their man.

As we now know, Jewell was innocent.  But the ordeal of defending himself against public perception took its toll on the heavy-set native Georgian.  The indefatigable Clint Eastwood turns in his best work since 2016’s “Sully” with “Richard Jewell” – another in his late-life series of films honoring American heroes.  Not well-decorated military heroes, or elected world leaders, but common, everyday Americans thrust into tough situations.  Jewell’s story may be the most heroic of all.  And not because he saved lives.  But because he was forced to save his own.

As Jewell, Paul Walter Hauser is perfectly cast.  He’s the guy who played Shawn Eckhardt, the man who struck and injured figure skater Nancy Kerrigan prior to the 1994 Olympics in “I, Tonya.”  He seems to have carved out a niche playing misunderstood societal outcasts.  Here, he embodies the spirit of Richard Jewell so perfectly, we forget we are watching an actor and not the actual person.

The versatile Sam Rockwell plays Jewell’s attorney, Watson Bryant – a low-end lawyer working for himself in a small corner office.  Jewell chose Bryant to represent him for no other reason than Bryant was the only lawyer Jewell knew.  Jewell had previously worked as a mail clerk for a small firm where Bryant was employed early in his legal career.  Almost immediately in over his head, Bryant takes a few days – and a few interactions with the FBI – to assess the situation.  Then he goes after the authorities and the media with a vivacious aplomb that’s absolutely fun to watch.  And Eastwood milks the proceedings for all they’re worth. 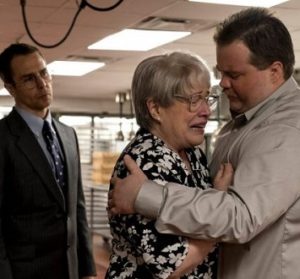 The first third of “Richard Jewell” gives us the background:  A shy, misunderstood police wannabe who works several security jobs until the Olympics opportunity presents itself.  So enamored with law enforcement, Jewell assiduously goes after partying college students when employed at a small liberal arts university – to the dismay of the college president.  He goes out of his way to keep disrespectful teens in line during his Olympic duty.  This guy has “police” written all over him.  But he has yet to break into that big bluecoat job that will mark his career.

Forever in Jewell’s corner is his supportive mother Bobi, played cautiously by Kathy Bates.  And I say cautiously because this is a role that could easily have been overwrought.  But Bates tones down the “my poor son” aspect, in favor of a nuanced performance that immediately ranks as one of the best of her career.  Her speech to the media late in “Richard Jewell” is one of the highlights of this outstanding film.

The rest of the film

The middle third shows us how easily Jewell’s heroic stature was replaced by suspicion among the American populace.  It’s as though we were so eager to learn the identity of the bomber, we latched onto the first theory put forth that made sense – whether the facts had been fully investigated or not.  The final third is where Rockwell comes to life to save the day for his client.  It is during this sequence that the overmatched attorney muzzles the over-talkative Jewell and guides public perception away from the misconceived introvert.

The rest of the cast

Also making strong showings are character actor John Hamm as the zealous FBI agent intent on tying Jewell to the crime, and Nina Arianda as Bryant’s secretary Nadya.  She also played Stan Laurel’s wife Ida in last year’s “Stan and Ollie.”  Here, she plays the part of Bryant’s brains – practically solving the crime (or at least un-implicating Jewell) without overstepping her position as a legal assistant.  It’s a fun role, and Arianda makes the most of her limited screen time.

Unfortunately, Olivia Wilde overplays her hand as Kathy Scruggs, the Atlanta print journalist who broke the story that the FBI was considering Jewell as a suspect.  Her cavalier attitude toward her co-workers, her overconfidence in her journalistic ability, and her “I’ll sleep with anyone to further my career” persona seem better suited for an Adam McKay film that one by Clint Eastwood.  Don’t get me wrong.  Wilde is good; she just seems to be acting in a different movie.

Presenting from all angles

And in a story in which it would seem so easy to take sides, Eastwood does an excellent job of presenting the tale from all angles.  Yes, the lead FBI agent is ardent.  But Eastwood presents his as a man simply doing the job to which he has been assigned.  Same with the Scruggs character.  She may be frantic and overplayed, but in the softer moments of the Billy Ray screenplay, Eastwood presents her as a writer who simply desires the next big scoop.  There are several characters attempting to further their careers in this picture, including Jewell himself.  When these ladder-climbers’ actions intersect, “Richard Jewell” makes its point, and Eastwood hits the proverbial home run.

As usual, Eastwood’s direction is succinct and to the point.  There are no wasted scenes.  Everything we see is in deference to the plot.  Absent any directorial flashiness we get from some of his colleagues, Eastwood has put together one of this year’s best films.  It’s a story most of us remember.  It may not be chock full of surprise details.  But in a way, that’s why it works.  “Richard Jewell” allows us to revisit a low point in American history – a low point not simply because a bomb detonated when the eyes of the world were focused on our country.  But because an innocent man was vilified in the public eye based on nothing more than the fact that he fit a profile.  Eastwood reminds us never to be too quick to judge.