Andrew Lloyd Webber is perhaps the most prolific musical theatre composer since Richard Rodgers.  His melodies are timeless, and his songs have inspired a generation of Broadway writers.  But the thorn that’s always stuck in my side is “Cats.”  The 1982 production seems to fall short of Lloyd Webber’s other work – lacking in creativity, a pencil-thin plot, and just one memorable song.

For some reason, director Tom Hooper (who turned in a very solid screen adaptation of “Les Miserables” in 2012) has taken it upon himself to bring “Cats” to the big screen.  But even a who’s who of acting talent can’t save this show from its own shortcomings.

Based on the confounding source material of T.S. Eliot’s “Old Possum’s Book of Practical Cats,” the show follows a young stray cat named Victoria who hooks up with a tribe of cats known as the Jellicles.  The Jellicles are about to embark on their annual selection of one cat to ascend to the so-called Heaviside Layer and return as a new cat.  It’s a ridiculous premise, but it’s used to tie together Eliot’s individual poems about various cats.  Under this structure, Victoria (and, by extension, the audience) is privy to an onslaught of the individual candidates.  Each sings its own song advocating his or her strengths in terms of the yearly selection.  This “plot” is really more of a theatrical arrangement – an excuse to string together a series of Lloyd Webber songs about Eliot’s cats.

Bored by the initial set-up and the weak opening numbers, “Cats” picks up steam as each cat is subsequently more interesting and creative than those preceding.  I can’t say I have a favorite, but in Hooper’s production, tap dancer Steven McRae stands out as Skimbleshanks, the railroad cat – if for no other reason than it’s refreshing to revisit the lost art of tap dancing.  Unfortunately, the Christopher Ross cinematography doesn’t do the musical any favors by shooting too much of the production up close.  Ross needs to back away his camera so we can witness the proceedings from the perspective of a Broadway audience.  For that matter, Hooper would likely have been better off to simply film a staged production of “Cats” rather than attempt to adapt it to the big screen. 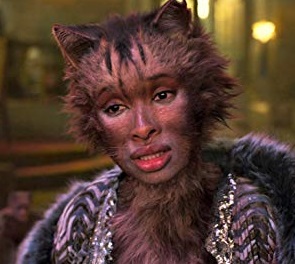 Ian McKellen, not known as a singer, shines in the role of Gus, the theatre cat.  And Taylor Swift almost brings down the house in her number as Bombalurina.  The great Jennifer Hudson has the juiciest role as Grizabella, the sad, outsider cat, charged with the task of singing the musical’s only great song, “Memory.”  Unfortunately, she cries through most of her time on camera, save for about eight measures of “Memory,” when she begins to belt out the song’s famous melody.

Viewing the proceedings is Victoria, played by British ballerina Francesca Hayward.  She may be an excellent dancer (although we wouldn’t know, from the cinematography), but I cannot impress upon you what a bad job she does as an actress.  Where she should approach the evening’s parade of cats with a sense of awe and wonderment, she appears as though she’s constantly posing for a glamour magazine.

James Corden and Rebel Wilson turn in humorous cameos as Bustopher Jones and Jennyanddots, but their songs are not the least bit memorable.  Dame Judi Dench is the wise Old Deuteronomy, tasked with the selection of this year’s Heaviside Layer candidate.  As always, Dench is a fine actress, but I wonder why this role couldn’t have been filled by someone with a musical pedigree.  Angela Lansbury immediately comes to mind.

Singer Jason Derulo as Rum Tum Tugger and actor Idris Elba as the evil Macavity round out the all-star cast.  I can’t help but imagine what this line-up of talent could have done with worthy source material.

And not only is the entire production shot too tightly, but Hooper’s “Cats” is simply too dark.  I understand that the whole show takes place over the course of a summer night in London, but the theatrical production at least illuminates the stage.  I kept waiting for someone to please turn on the lights.

I can’t say my disappointment in “Cats” is unexpected, as I’ve never liked the show.  But Hooper could have made a few choices that would have at least endeared a cinematic audience to the material.  As it stands, we feel like we’re sitting in the middle of a barren stage watching a series of singers and dancers jump all around us for no reason.  And that’s no excuse to film an uninspiring 37-year-old musical.