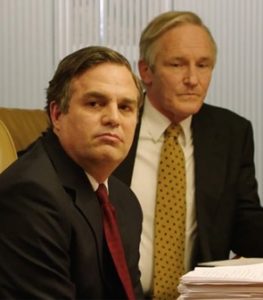 Rob Bilott is a young successful attorney in a high-powered downtown Cincinnati law firm who is visited one day by a farmer and his wife from Parkersburg, West Virginia – Bilott’s hometown.  The farmer, Wilbur Tennant, complains that runoff from the nearby DuPont plant has tainted the creek water on his property, causing most of his livestock to die.  Bilott explains that his firm defends corporations (such as DuPont) from lawsuits such as that suggested by Tennant.  Still, since Tennant knows Bilott’s grandmother, Bilott promises to recommend a local attorney to handle the case.

Over the course of the next several days, Bilott can’t stop thinking about Tennant’s long drive to Cincinnati, and the expression of dread fear on his face as he briefly explained his predicament.  So Bilott decides to spend a day in Parkersburg visiting family and the Tennant farm.  Bilott not only witnesses the graves of the many cattle Tennant has buried over the past couple years, but he also witnesses the crazy antics of a couple of the cows infected by whatever disease has overtaken the area livestock.

While such a case is admittedly not the type Bilott would take, and the odds are impossible – a farmer seeking damages from one of the world’s largest chemical manufacturers – Bilott can’t seem to get the images of the poor farmer and his livelihood out of his head.  After approaching DuPont counsel Phil Donnelly at a couple social functions, Donnelly’s thinly veiled attempts to quell any potential investigation lead Bilott to believe he may be onto something. 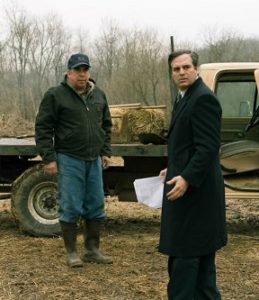 As you might imagine, “Dark Waters” covers some familiar territory.  While few of us are familiar with the details of how DuPont developed Teflon in the 1950s even though they knew it had the potential to cause cancer and birth defects, the Mario Correa and Matthew Michael Carnahan screenplay plays out like a retread of the superior “Erin Brokovich,” which also pitted an underdog against a corporate giant (Pacific Gas and Electric) in a similar case involving environmental and health negligence.  Much as the current Martin Scorsese offering “The Irishman” has a “been there, done that” feel (given Scorsese’s vast catalog of gangster sagas), “Dark Waters” offers nothing new to the genre.

Having said that, Haynes and his screenwriters do offer a couple fresh angles on the little guy vs. corporate America theme.  First, Bilott’s wife and family play an important role in “Dark Waters.”  Bilott isn’t simply a single workaholic, a la Adam Driver’s character in “The Report.”  He does have family commitments, and a loving and supportive wife.  She’s played by the versatile Anne Hathaway.  Unfortunately, as the case progresses, the Bilotts feel personally threatened by DuPont.  I’ll buy the Parkersburg townsfolk (many of whom owe their livelihoods to DuPont) lashing out against the Tennant family for going after the town’s largest employer.  But DuPont has the deep pockets to counter any such lawsuits against them; they simply wouldn’t pose a personal threat to a lawyer.

I did like the fact that Bilott remains close to the Tennants as the case plays out over many years.  He obviously feels a deep personal connection with them, and he cares about their plight – not simply from a professional standpoint.  Ruffalo gives Bilott the personal touch the character requires.  It’s a similar role to that which he played in “Spotlight” – in which he was a Boston Globe reporter uncovering facts in the Catholic priest sexual abuse scandal.  Here too, his character becomes increasingly engaged in his task as facts are revealed.

The final legal showdowns pitting Bilott’s firm against DuPont are surprisingly weak.  There’s no John Grisham intensity here, and again, we feel like we’ve seen this type of story before.  Toward the end, Haynes’ characters appear as though they’re simply going through the motions of presenting the material.  We all like to see justice served – particularly against big, unfriendly, faceless, corporate America – but “Dark Waters” leaves us somehow wanting more.  There should be a reason to stand up and cheer with this kind of film.  But there simply isn’t.

“Dark Waters” certainly isn’t a bad film, but it doesn’t raise hairs the way “Erin Brokovich” did – or even Niki Caro’s 2005 offering “North Country,” which pitted a Minnesota mining company employee (Charlize Theron) against her employer in a landmark sexual harassment case.  “Dark Waters” is mild and soft when it needs to be bold and daring.  And that’s a complaint I can’t recall ever making against this type of film.  It should be one of this year’s Oscar contenders, given the subject matter and acting pedigree.  Unfortunately, it is likely to be forgotten by the time the nominations are announced in January.