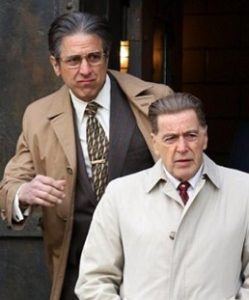 In Martin Scorsese’s latest gangster saga “The Irishman,” Robert DeNiro (sporting contacts that give him blue eyes) plays Frank Sheeran, a truck driver who becomes a mob hitman, and later friends with teamsters’ boss Jimmy Hoffa.  Hoffa is played by Al Pacino, who (ironically) has never worked with Scorsese before.  Mafia don Russell Bufalino, who hires young Frank as a hitman in the 1950s, is played by Scorsese regular Joe Pesci.  Other Scorsese friends, including Harvey Keitel, pepper the large cast.

At three-and-a-half hours, “The Irishman” covers a quarter century of mafia exploits surrounding the Bufalino family, who operated in Philadelphia.  The Steve Zaillian screenplay (adapted from Charles Brandt’s 2004 novel “I Heard You Paint Houses”) drags during the middle third, as too many peripheral characters are introduced and then quickly killed off or never heard from again.  Still, the initial plot set-up (including introductions of the primary characters), the climactic scene involving Hoffa’s 1975 disappearance, and long but powerful denouement keep “The Irishman” from ever being uninteresting.

Been there, done that

Nobody spins a good gangster yarn as well as Scorsese, but following the superior “GoodFellas,” “Casino,” and “The Departed,” “The Irishman” has a definite “been there, done that” feel to it.  Granted, DeNiro, Pesci, and Pacino are practically octogenarians, but they simply don’t seem as interested in the material here as in previous efforts.  Even the mafia hits lack the impact we expect from this kind of endeavor.  That’s not to say “The Irishman” doesn’t have some excellent pieces; it just doesn’t add up to a great “whole.” 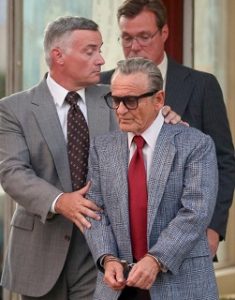 No one is more adept staring in these mafia sagas as DeNiro, and he’s the perfect actor around which to frame a story such as “The Irishman.”  He provides the ideal anchor, as other characters come and go.  Pacino is always great when he plays the excitable, unpredictable strongman.  His Jimmy Hoffa is memorable, but simply not in the same category as his masterpiece performances in “Dog Day Afternoon” or “And Justice for All.”  Pesci plays against type here as the calm, collected head of the Bufalino crime family – and he nails the part, proving his versatility as an actor.  It’s surprising Pesci never became a bigger star; all his best roles have been in Scorsese films.

Ray Romano is charming as the Bufalino family’s high-powered attorney – who gets them out of so many jams we lose count.  Marisa Tomei, Anna Paquin, and Bobby Cannivale round out the all-star cast.

The climactic scene features Scorsese’s signature quick editing, to build tension for viewers.  And the screenplay provides occasional comic relief, including an hilarious bit where Hoffa complains to Frank about how most Italians are named “Tony.”  But there’s nothing as memorable as Pesci’s “Are you making fun of me?” routine from “GoodFellas.”

The aforementioned story resolution tacks at least a half-hour onto “The Irishman” following the disappearance of Hoffa.  Normally this would bother me, but here it works.  Scorsese and Brandt give us time to reflect on the preceding matters as we watch Frank age into a nursing home setting, and try to mend fences with his four daughters.  Unlike in many crime epics, Frank’s family plays a role in “The Irishman.”  We see his interaction with his daughters from their childhoods to their adulthood, and their presence is never far from Frank’s mind in any of his hitman chores and mafia dealings.  The family angle adds a personal touch often lacking in such pictures.

And as usual, Scorsese nails the setting pieces.  By this I mean there is simply no need to provide titles informing us what year it is.  He does such a great job with the hair styles, clothing, décor, and music that we know exactly when we move from the 1960s to the 1970s.  Even the hotel rooms are outfitted exactly as we remember them from the various time periods.

Still, I can’t help but feeling that nothing in “The Irishman” is fresh anymore – and not only because Scorsese has made so many mob films.  After the “Godfather” saga and others, filmmakers need to bring something fresh to the genre for us to take note.  Consider Wayne Kramer’s 2003 picture “The Cooler.”  That was a non-episodic story about a specific casino boss and his hard-working but underappreciated lackey.  It packed a punch, and relayed a story we had never seen before.  Yes, it was told within the structure of a crime film, but its angle was decidedly new and fresh.

That’s simply not the case with “The Irishman.”  Had Scorsese never made a gangster epic, this might rank as one of the year’s best.  But Scorsese, DeNiro, Pacino, Pesci, and Keitel have worked this brand into the ground.  Perhaps “The Irishman” is Scorsese’s swan song to the genre.  If so, that’s great.  But consider that just six years ago, Scorsese gave us one of the decade’s heaviest (and funniest) adventures with the Leonardo DiCaprio vehicle “Wolf of Wall Street” – a film that proved Scorsese was still capable of churning out high-quality work superior to that of most young filmmakers.  By contrast, “The Irishman” feels like it was made by octogenarians.