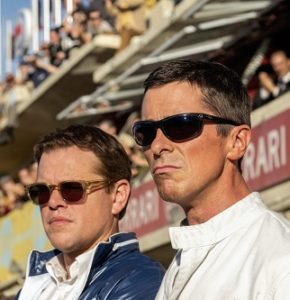 Henry Ford II (grandson of Henry Ford) always wanted to win the 24 Hours of Le Mans, the greatest endurance race in the world.  But Le Mans was Ferrari’s show.  The Italian sportscar had won almost every Le Mans since the early 1950s.  When Enzo Ferrari refused to sell his company to Ford in 1963, Henry Ford II made it a goal to produce a car capable of beating Ferrari at Le Mans.

And with no more plot outline than this, James Mangold’s “Ford v Ferrari” turns out to be one of the most entertaining pictures of 2019.  It’s a real crowd-pleaser – the kind Hollywood used to churn out regularly.   But in this cynical day and age, it’s refreshing to see a good, old-fashioned, stand-up-and-cheer tale in which the good guys and bad guys are well-defined from the start.

And it doesn’t hurt that the racing scenes are some of the best ever filmed.  The Phedon Papamichael cinematography is so thrilling, I wonder if he can’t be hired to film the television broadcast of the Indy 500.  Unlike that race, in which cameras are mounted to some of the cars for little effect, “Ford v Ferrari” actually gives audience members the sense of racing without physically placing them in cars.  It’s quite an achievement.

When Ford decides to build a Le Mans car, he enlists the tutelage of Carroll Shelby, a former Le Mans champion and owner of his own high-performance automobile manufacturing company.  One of Shelby’s first decisions is to place hot-tempered British racing phenom Ken Miles behind the wheel.  Although Miles is known for frequent run-ins with the press and competing drivers, he knows cars like no one else.  Miles has the ability to “feel” everything about the car when test-driving it.  For example, after a quick test drive, Miles reports to Shelby a half-dozen changes he’d like to see made.

That’s the kind of feedback Shelby knows is vital to Ford’s goal.  But Shelby must walk a fine line.  He needs to take Miles’ often harsh assessments and formulate them into language which won’t upset the suits at Ford headquarters in Michigan.  Likewise, when Henry Ford II declares Miles is not the type of driver who represents Ford values, it falls on Shelby to disseminate this news to the excitable driving legend.

As Carroll Shelby, Matt Damon turns in another top-notch performance – logging another milestone in his decorated career.  But if there is a star of “Ford v Ferrari,” it’s the chameleonic Christian Bale (“American Hustle,” “Vice”) as the proud and cranky Ken Miles.  Bale has fun with this role, as he constantly (yet unconsciously) makes Shelby’s job just a little more difficult than it needs to be. 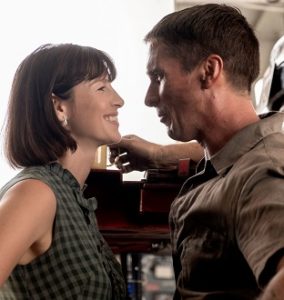 In the greatest directorial choice of the film, Mangold and his team of screenwriters focus a great deal of time and attention on Miles’ wife and son – which serves to soften the hard edges of the character.  Mollie Miles, played by British actress Caitriona Balfe, is almost as much a gearhead as her husband – yet she’s been begging him for years to give up the dangerous sport and concentrate on his other career as a mechanic.  Young Peter Miles is played by Noah Jupe (“Wonder,” “Suburbicon”) as a curious and devoted son, who loves more than anything to see his dad succeed during his races.  Peter is also a blossoming gearhead, who soaks up everything his father teaches him about cars and their “personalities.”

Playwright and actor Tracy Letts almost overplays his hand as the boorish Henry Ford II, but Shelby brings him down to earth in one of the film’s funniest scenes when he begs Ford to join him for a test spin.  Jon Bernthal plays a young Lee Iococca, tasked by Ford to spearhead the Le Mans effort.

With all manner of obstacles thrown in the way of the Ford effort – including budget constraints, lack of experience with endurance racing, and so forth – it’s a safe bet to say Ford will have great success by the culmination of “Ford v Ferrari.”  Fortunately, the screenplay throws in enough surprises to keep the proceedings from becoming entirely predictable.

But again, this is good guy vs. bad guy filmmaking the way we used to experience it.  Think “Rocky” or “Hoosiers.”  I can say all I want about the screenplay and the acting, but the greatest compliment I can pay to “Ford v Ferrari” is that it is simply a lot of fun.  And you don’t have to know the slightest thing about auto racing to enjoy it.