Q95 Presents an Evening With 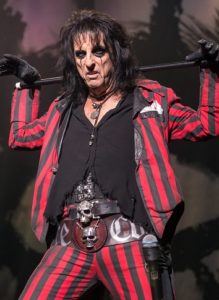 Rock legend Alice Cooper “pioneered a grandly theatrical brand of hard rock that was designed to shock.” Known as the “Godfather of Shock Rock” and inspired by horror movies, vaudeville, and garage rock, Cooper created shows that featured electric chairs, guillotines, fake blood, and deadly snakes – a combination that made the shows both hard to watch and impossible to look away from. Alice Cooper was originally the name of the band that formed while Cooper was in high school in Phoenix during the late 1960s. The band broke into the international music mainstream in 1971 with their breakthrough album “Love It to Death” and were inducted into the Rock and Roll Hall of Fame in 2011. Cooper adopted the band name in the 1970s and began his solo career in 1975 with his debut concept album, “Welcome to My Nightmare.” Cooper has continued touring and making music since, as well as starring in many movies and television shows. Known for his sociable and witty offstage personality, Cooper was once called the world’s most “beloved heavy metal entertainer” by The Rolling Stone Album Guide.