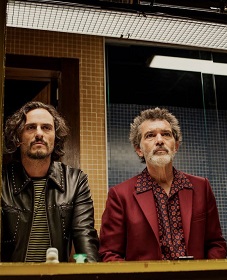 Over the years, several directors have made films about the trials and tribulations of their craft – perhaps most notably Federico Fellini’s landmark 1963 picture “8-1/2,” and perhaps least notably Blake Edwards obnoxious and self-absorbent 1981 bomb “S.O.B.”  Now acclaimed Spanish director Pedro Almodovar joins the ranks with his semi-autobiographical “Pain and Glory,” a film, like “8-1/2,” which concentrates on the occasional writer’s blocks faced by those with the creative gene.

“Pain and Glory” opens as once-renowned director Salvador Mallo’s 30-year-old classic “Sabor,” has been remastered and re-released.  Asked to preside over a post-viewing question-and-answer session, Salvador calls on lead actor Alberto Crespo to join him for the session.  The two haven’t spoken in many years, and have been on the outs since Salvador openly criticized Alberto’s acting skills during the filming of “Sabor.”

In the film’s only false move, Alberto introduces Salvador to smoking heroin – causing him to fall asleep and recall scenes from his childhood.  In “8-1/2,” protagonist Guido (Marcello Mastroianni) is also suffering through a creative crisis, but he evokes childhood memories without an external stimulus, such as heroin.  As Salvador’s heroin addiction grows, the memories of his adolescence occur more frequently.  It’s one thing to show the central character’s frustration through an increasing intake of alcoholic beverages or through occasional outbursts of anger, but heroin use is so far outside the mainstream I found its inclusion in “Pain and Glory” to be unrealistic.  Furthermore, outside stimuli are not required for characters to engage in recalling their youth.

Almodovar’s latest installment succeeds on the strength of the flashback sequences – and that’s something you’ll hardly ever hear me say.  But in this case, it’s the childhood scenes that give us a sense of where Salvador has come from – and how he ended up at the end of his rope.  Raised in poverty by his well-meaning parents, Salvador receives a full-ride to a local Catholic grade school, and tutors an illiterate neighborhood laborer.  His father is military, so most of his early bonding is with his mother.

She’s played by Penelope Cruz – an actress who has yet to turn in a performance anything shy of stunning.  Much as in last year’s “Everybody Knows,” Cruz anchors the proceedings in a supporting role by inducing us to feel her motherly instincts – from protecting to teaching to supporting young Salvador.  Her portrayal of Salvador’s mother is the most intriguing aspect of “Pain and Glory.”

Adult Salvador is played by the always reliable Antonio Banderas.  But here, he seems to walk through the film in a funk.  I realize that’s the nature of writer’s block, but I’m surprised such an accomplished actor as Banderas was unable to bring more to the role.  Mastroianni had the same issue in “8-1/2,” but his character seemed more alive; more interested in breaking out of his slump.  Banderas’ Salvador seems perfectly content with his descent into substance addiction.

It is only when reunited with a former gay lover that Salvador finds the will to live again.  Their reunion is the highlight of the present-day story line.  While attending Alberto’s one-man performance of a play written by Salvador, Federico (Leonardo Sbaraglia) recognizes their mid-1980s romance and seeks out Salvador for a reunion.  When Salvador sees what Federico has accomplished with his life – wife, family, career, and beating his own heroin addiction – he is infused with the desire to live again.  It’s a strong turning point in a film that requires one.  Ironically, in “8-1/2” Guido never regains his creative ability, yet it is the far superior of the two films.

Top half but not a classic

As Almodovar pictures go, “Pain and Glory” is certainly in the top half, although it will never be mentioned in the same breath as “Women on the Verge of a Nervous Breakdown” or 2016’s “Julieta.”  But it is a fairly strong piece of work, and includes Almodovar’s signature twist at the very end – a twist we can’t foresee, and which allows us to leave the theatre on an upbeat note.

“Pain and Glory” will likely not win Best Foreign Language Film at this year’s Oscars, but a nomination would not surprise me.  And once again, Penelope Cruz proves why she’s one of our greatest working actresses.