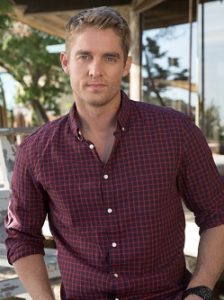 Brett Young has captured the hearts of fans everywhere through his honest lyrics and West Coast-meets-Southern sound, aptly dubbed “Caliville” style. The 2018 ACM Awards New Male Vocalist of the Year recently released his sophomore album, TICKET TO L.A. on BMLG Records. The 13-track project hit the No. 1 spot on the Billboard Country Albums Chart upon release and features lead single “Here Tonight” which topped the Mediabase and Billboard Country charts. Written alongside Ben Caver, Justin Ebach, and Lady Antebellum’s Charles Kelley, “Here Tonight” marks Young’s fifth consecutive No. 1 single. The follow-up release, “Catch,” is currently climbing the radio charts. TICKET TO L.A. follows his PLATINUM-certified, self-titled debut album in 2017 with the New York Times calling it “soothing, approachable.” Recorded in Nashville with producer Dann Huff (Keith Urban, Thomas Rhett, Steven Tyler), the 2018 ASCAP Country Songwriter-Artist of the Year penned 11 of the 12 tracks on his Billboard Music Awards-nominated project, which also produced four consecutive No. 1 radio hits: PLATINUM “Sleep Without You” and “Like I Loved You,” 2X PLATINUM “Mercy,” plus 5X PLATINUM “In Case You Didn’t Know.” The latter was honored as the BMI Country Awards’ 2018 Song of the Year. Along with the success of his over 2.3 billion in total song streams, he continues to impress the genre and beyond with nominations from the ACM, CMA, Billboard, Teen Choice, iHeartRadio, and most recently a CMT Music Awards nod for Performance of the Year for his “Motownphilly” collaboration with Boyz II Men for CMT Crossroads. Drawing in a devoted fan base with his unique voice that is “a gentle and seductive combination of silk and gravel” (All Access), Young has carved out his own lane in both performance delivery and songwriting. “Sleep Without You” earned Brett two Association of Independent Music Publisher (AIMP) Awards nods: Writer of the Year and Song of the Year in addition to being honored at the 2017 ASCAP Country Awards for a Top Country Song. Above the industry successes, his relationship with fans found Brett selling out stops on both of his headline tours: CALIVILLE TOUR and CMT ON TOUR: HERE TONIGHT. He has also toured with Luke Bryan, Thomas Rhett, and Lady Antebellum. Brett is currently headlining shows and festivals throughout the country while gearing up to release his Caliville clothing line in partnership with Kohl’s. For additional information, visit www.brettyoungmusic.com.

Tickets are on sale at www.browncountymusiccenter.com and at www.ticketmaster.com, and the venue box office.