Acclaimed singer-songwriter Elvis Costello will bring his band the Imposters to the Palladium on Nov. 16 for their debut appearance at the Center for the Performing Arts. 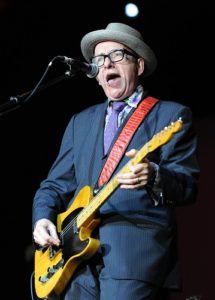 Costello emerged from England’s 1970s new wave scene to launch a genre-defying career that now boasts more than 30 albums, spanning the spectrum of Western music from punk-flavored pop and rock to country, classical, and jazz sounds. The Grammy winner and Oscar nominee has collaborated with artists as diverse as Paul McCartney, Burt Bacharach, the Brodsky Quartet, Allen Toussaint, the Roots, and his wife, jazz pianist Diana Krall.

As a solo artist and with his Rock and Roll Hall of Fame band the Attractions, Costello claims four entries on Rolling Stone’s list of “The 500 Greatest Albums of All Time.” Known for their indelible melodies, clever wordplay and world-weary insights on romance, his timeless tunes have included “Alison,” “Watching the Detectives,” “Radio Radio,” “Oliver’s Army,” “Accidents Will Happen,” “Man Out of Time,” “Veronica,” and “Everyday I Write the Book.”

For patrons who already have subscribed for the upcoming season, Box Office staff can assist with the purchase. Single-event tickets to the show will go on sale in August, along with the other 2019 Center Presents performances.

This concert is part of the Center’s new Encore Series, a multi-genre schedule featuring performances added throughout the season.