About the Oak Ridge Boys 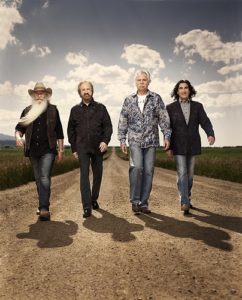 Theirs is one of the most distinctive and recognizable sounds in the music industry. The four-part harmonies and upbeat songs of The Oak Ridge Boys have spawned dozens of Country hits and a Number One Pop smash, earned them Grammy, Dove, CMA, and ACM awards, and garnered a host of other industry and fan accolades. Every time they step before an audience, the Oaks bring four decades of charted singles, and 50 years of tradition, to a stage show widely acknowledged as among the most exciting anywhere. And each remains as enthusiastic about the process as he has ever been. The group has scored 12 gold, three platinum, and one double platinum album—plus one double platinum single—and had more than a dozen national Number One singles and over 30 Top Ten hits. The Oak Ridge Boys have appeared before five presidents. And they have become one of the most enduringly successful touring groups anywhere, still performing some 150 dates each year at major theaters, fairs, and festivals across the U.S. and Canada. Their history will now forever be enshrined in the hallowed halls of the Country Music Hall of Fame in Nashville, Tennessee, where The Oak Ridge Boys—Duane Allen, Joe Bonsall, William Lee Golden, and Richard Sterban—were inducted on October 25, 2015.

Tickets are on sale at www.browncountymusiccenter.com and at www.ticketmaster.com. Tickets will also be available for purchase in person at the Brown County Convention and Visitors Bureau Visitor’s Center (located at 211 S. Van Buren Street in downtown Nashville) and also, eventually, at the venue box office.