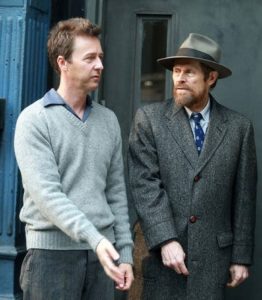 It has been a longtime passion of actor-director Edward Norton to develop Jonathan Lethem’s 1999 neo-noir crime novel “Motherless Brooklyn” into a major motion picture.  Now he has, and the result is a taut thriller that proves to be so much more than a standard police procedural.  “The French Connection” rose above the bulk of the police procedural genre with its breathtaking action sequences.  But I equate “Motherless Brooklyn” more to Roman Polanski’s “Chinatown” in that we remain glued to the screen as layers upon layers of narrative are revealed.  The joy is in the revelation of plot.  And “Motherless Brooklyn” has a lot of plot.

Make sure you have your popcorn before the very brief opening credits.  Make sure you’ve used the restroom.  You won’t want to miss a minute of the almost two-and-a-half hour run-time of this tense mystery.  And when it’s over, you’ll want to go back and watch it again.

Norton stars as Lionel Essrog, a young single loner working for a 1950s private investigation firm headed by Frank Minna, a World War II vet and a real pro in the inspection racket.  Unfortunately, Minna loses his life in an early action scene in which an investigation goes wrong.  As the rest of the firm, now headed by Tony Vermonte (Bobby Cannavale), resumes their work, Lionel can’t keep from thinking about Minna’s death.  Why would anyone have anything against Frank Minna?  What was Minna involved in?

As Lionel begins to piece together Frank’s verbal and written clues (more on Lionel’s ability to do so in a moment), he discovers an underworld centered around a small jazz nightspot in Harlem, and corruption in city government revolving around city planner and organizer Moses Randolph, played to the hilt by Alec Baldwin.  This is the kind of meaty role Baldwin loves to sink his teeth into.

Again, very little occurs in the way of the mind-numbing, high-powered, shoot-‘em-up action scenes we’re so used to witnessing in today’s Hollywood fare.  While “Motherless Brooklyn” moves along at a very quick clip, it is more cerebral than most viewers are likely expecting – particularly after the opening sequence in which Minna loses his life.  Even the final showdown is more a tete-a-tete between Lionel and Randolph than it is something out of an old Schwarzenegger film. 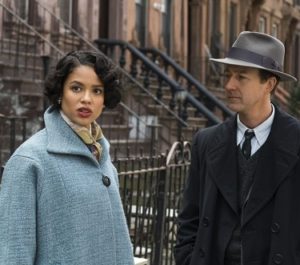 But here’s what sets “Motherless Brooklyn” apart from even “Chinatown:”  Lionel suffers from an undiagnosed mental disorder.  Lionel and his compatriots in his firm say, “His brain is messed up,” and, “He’s just not right.”  One of them even calls him “Freakshow.”  Today, we would place Lionel somewhere on the autism scale.  He obviously has Tourette’s Syndrome – a condition in which the victim occasionally shouts out uncontrollably.  Some of Lionel’s outbursts are downright funny, because he verbalizes that which is socially unacceptable, but which we are all thinking.  But often his eruptions are annoying – to him and to those around him.  It’s an upsetting and confounding disease, and the fact that Lionel is able to hold a job at all (particularly in the 1950s) is noteworthy.

The autistic savant part of Lionel’s condition results in his ability to remember every word of long-past conversations, including the capacity to investigate a case without writing down any details.  The character is akin to a mentally challenged version of Detective Ed Exley – Guy Pearce’s memorable gumshoe from “L.A. Confidential.”

Lionel’s love interest (if you stretch the boundaries of the meaning of the phrase) is Laura Rose (played by Gugu Mbatha-Raw).  She is a regular at the Harlem nightclub which has something to do with Minna’s homicide.  She is mesmerized by Lionel’s ability (as are others), but the calming effect of her affection has a corresponding calming effect on Lionel’s affliction.  He seems almost “normal” around her.  And Lionel’s own voice-over narrative is also spoken without any outbursts.

The fact that Norton chose to take on such a role is courageous enough (as an actor, and as a director directing himself), but that he guides the proverbial thread through the eye of the needle so accurately is a testament to his keen acting chops.  If the verbal explosions are too frequent and wild, the character becomes a caricature; yet if he underplays the condition too severely, we forget he isn’t “normal.”  It’s a delicate balancing act, and Norton comes through with flying colors.

Bruce Willis is excellent as Frank Minna – a role he could play in his sleep, yet he is no less excellent because of this ability.  Cannavale and Mbatha-Raw are fine, as is Cherry Jones as protest leader Gabby Horowitz – the kind of well-meaning and self-righteous neighborhood organizer who is just smart enough to create a stink that the corrupt Randolph despises.  Willem Dafoe turns in yet another fabulous performance as Randolph’s estranged brother – a man who knows all too much about his sleazy dealings yet is reluctant to reveal too much to Lionel. 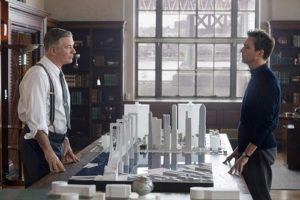 My only casting issue is that which should have been a slam dunk.  Following similar brilliant turns in “The Cooler” and “Glengarry Glen Ross,” Alec Baldwin was born to play the role of Moses Randolph – a man so much more powerful than the mayor that he can demand anything of him… and get it!  In some scenes, Baldwin is as smarmy and overconfident as we expect.  But in others, he overplays the character – to the point where he seems more like his own parodic version of President Trump than Shelly Caplow, his casino boss character in “The Cooler.”

I suspect when Norton adapted the screenplay, he mentally equated Baldwin’s big “I don’t care how many neighborhoods I have to destroy to build my next creation” speech with Michael Douglas’ “Greed is good” speech from “Wall Street.”  But we still remember Douglas’ soliloquy 32 years later.  We will not still be recalling Baldwin’s in 2051.  I find it ironic to say Baldwin’s character could have been stronger; suffice to say that it should have been more focused.

On the whole, “Motherless Brooklyn” is a home run.  It’s not in the same class as “Chinatown,” but it’s a damn sight superior to “Mulholland Falls,” the 1996 Nick Nolte vehicle in the same vein.  Again, Norton’s character – with all his ticks, twitches, and laserbeam-focused brain – is what sets this film apart from any other.  And I suspect we’ll see Norton nominated for at least an acting Oscar, if not one for his splendid direction.  Given the depth of the plot and characters, I hope the academy doesn’t eliminate Norton from the directing category, the way Bradley Cooper was left out for last year’s “A Star is Born.”  Norton has now reached the pinnacle of his long, stellar career, and I hope “Motherless Brooklyn” will not be the last we see of his genius.