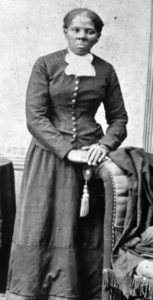 Harriet Tubman was a runaway slave who found freedom in Philadelphia, only to return to the plantation that imprisoned her to guide family members and friends to their freedom.  She eventually became a leader in the burgeoning Underground Railroad movement, and when she died in 1913, she was known as one of the greatest of American abolitionists.  She’s such a monumental figure in U.S. history, it’s a wonder Hollywood has never made a major motion picture about her.

Until now.  Kasi Lemmons’ “Harriet” begins when the slave known as Minty asks her owner for her freedom after she’s located by her husband John Tubman, a free man.  When Minty’s owner refuses, she escapes in the middle of the night.  John isn’t so lucky, as he’s captured and conscripted into slavery himself.

When Minty reaches Philadelphia, she connects with William Still, a writer and abolitionist with a history of helping runaway slaves adjust to their newfound freedom.  Still finds Minty a job as a maid in a local hotel and advises her to take a new name.  This is when she becomes Harriet Tubman.

Initially returning to her Maryland plantation for her husband, Harriet returns with a bevy of friends and family members – but not John, as he’s taken another wife, thinking Minty had died.  Harriet never remarries, but spends the rest of her young life returning to slave territory to help others to find their freedom during the pre-Civil War years. 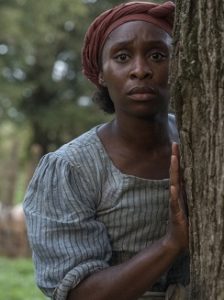 It’s a story of triumph over evil, and an important part of nineteenth century American history.  And as our protagonist, British singer and Broadway star Cynthia Erivo sparkles in a noteworthy performance.  Suffice to say that in a film about such a heroic figure, the casting of Harriet Tubman must be perfect.  Erivo is as perfect a fit for Tubman as one can imagine.  Much as with Taron Egerton as Elton John in “Rocketman,” Erivo is essentially an unknown commodity to most filmgoers.  Therefore, we don’t see a well-known actress channeling Harriet Tubman; we see Harriet Tubman.

Leslie Odom Jr. (Aaron Burr in “Hamilton”) turns in a fine performance as William Still, the abolitionist, as does Janelle Monae in the role of Marie, the proprietor of the hotel where Harriet first finds work.  Marie also serves as a guide to Harriet – teaching her how to hold herself and speak to others as a free woman, and not as a slave.  Joe Alwyn is the creepy Gideon, Minty’s slave owner, and Zackary Momoh plays Harriet’s husband John.

Needs to be more hard-hitting

As a history lesson and motion picture experience, “Harriet” is perfectly fine.  There’s nothing inherently wrong with this film.  Yet it still left me somewhat underwhelmed.  I expected something a little more hard-hitting; something along the lines of Steve McQueen’s 2013 masterpiece “12 Years a Slave.”  I’m not saying “Harriet” needs more blood and guts, but we need to have a sense of the horror of slavery.  And that’s conspicuously missing.  We’re left to know the depths of the disgust of the institution of slavery from our schooling, reading, and yes, from “12 Years a Slave.”  In fact, “Harriet” almost plays out as a sequel to McQueen’s film.  It’s as though “Harriet” doesn’t quite work without our having seen “12 Years.”

In 2013, I wrote that Steven Spielberg’s “Lincoln” is a companion piece to “12 Years a Slave.”  But “Harriet” seems more like its sequel.  “12 Years” exposes us to the abhorrence of the bondage and captivity of human beings; “Harriet” shows us how one woman conquered the establishment of slavery.  “Harriet” is less effective without having previously seen “12 Years a Slave.”  And that’s a shame.  It needs to stand on its own. 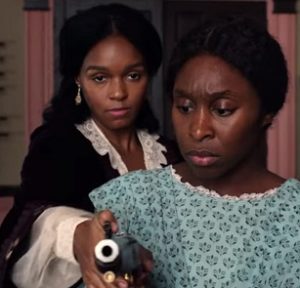 So what’s wrong with “Harriet?”  Again, nothing is intrinsically amiss with Lemmons’ film.  It simply never rises to the level of greatness.  It’s a formulaic picture, with a heavy-handed Terence Blanchard score that gives it the feel of a television movie-of-the-week.  The dialogue is not particularly memorable, and the progression of the Gregory Allen Howard and Kasi Lemmons screenplay never rises above the level of predictable.

Still, “Harriet” is a decent piece of filmmaking.  It’s the kind of movie which could have a long shelf life in college-level American History classes.  But it will never be mentioned in the same breath as “12 Years a Slave” or “Lincoln.”  There are simply no surprises – even for those of us who know little of Tubman’s life.  The life depicted in “Harriet” is about what we expect.  She’s triumphant, headstrong, righteous, and determined.  She continues to surprise those who sell her short.  And while it’s great to see a lead character unafraid to wear her Christianity on her sleeve, even that factoid is not necessarily surprising.

I’m recommending “Harriet,” but with the caveat that you will learn almost nothing new about one of the greatest Americans of the nineteenth century.