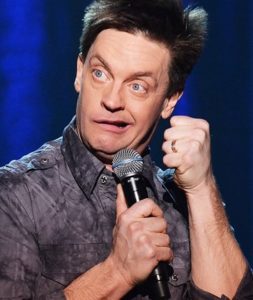 Jim Breuer is an American comedian, radio host, writer, and actor who first found fame as a cast member of NBC‘s “Saturday Night Live” in the ‘90s. He subsequently accrued a sizable film and television résumé, a collection of comedy albums, and many years on the road as a standup that have included comedy tours with a full heavy metal band. His memoir “I’m Not High (But I’ve Got a Lot of Crazy Stories About Life as a Goat Boy, a Dad, and a Spiritual Warrior)” was published in October 2010. The following year, he joined the Anti-Social Network tour with Dave Attell, Bill Burr, and Jim Norton. Another one-hour special, this time for Epix, “And Laughter for All,” was recorded at Manhattan’s Gramercy Theatre and premiered in 2013. A music-comedy album marking his return to heavy metal was released by Metal Blade in 2016. Titled “Songs from the Garage” and credited to Jim Breuer and the Loud & Rowdy, it featured Anthrax‘s Rob Caggiano, Joe Vigliotti, and Mike Tichy, as well as appearances by AC/DC‘s Brian Johnson.