Dolemite Is My Name 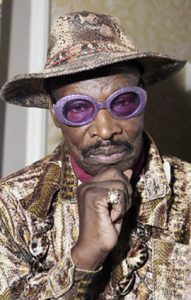 Rudy Ray Moore was an unsuccessful early R&B singer from the Chuck Berry era, whose songs never caught on with mainstream (or even black) audiences.  Working in a Los Angeles record store in the early ‘70s, Moore became fascinated with the rhyming ramblings of a local miscreant who would frequent the store and, in short order, have the patrons laughing at his off-color verse.

Creation of the Dolemite character

Enchanted with the vagrant’s ability to enrapture shoppers with his memorized poetry, Moore spent a night in a back alley recording his sonnets.  He then made those verses his own, as he developed the comedic character Dolemite.  Able to speak to black night club audiences in a way they were unaccustomed to hearing, Moore’s Dolemite became a local hit.  Unfortunately, record companies were unwilling to take a chance on his blue and profane routines, fearing outcry from white audiences, as well as no realistic chance of radio airplay.

Undeterred, Moore recorded an album in his own apartment with friends standing in for a live audience, then sold the records out the trunk of his car.  More comedy records followed, and Dolemite was a hit – at least locally.

For his next project, Moore decided to make a feature-length motion picture – but again ran into rejection by the major studios.  Tell me if you notice a theme here, but Moore essentially financed his own film, which became a landmark in the blaxploitation genre of the mid-1970s. 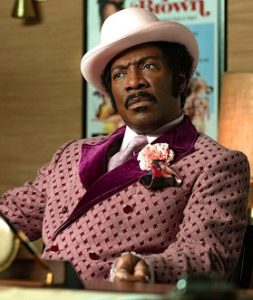 Craig Brewer’s “Dolemite Is My Name” tells the story of how Moore brought “Dolemite” to the big screen.  And not only is it encouraging to watch a self-taught entrepreneur at work, but it’s a triumphant return to the big screen for actor-comedian Eddie Murphy.  In his meatiest role in years – perhaps ever – Murphy preens and prances about the screen as the ever-confident self-promoter.  And since Rudy Ray Moore is not a well-known commodity, we accept Murphy’s interpretation – in much the same way we accepted Robin Williams as radio disc jockey Adrian Cronauer in “Good Morning Viet Nam.”  Since we didn’t “know” Cronauer, we accepted Williams’ understanding of the character as “correct.”

And that’s the most accurate analogy I can give you as to why Murphy is so successful playing Moore/Dolemite.  For once, Murphy has a vehicle in which he is allowed to be himself within the confines of an actual character.  “Dolemite Is My Name” borders on an Eddie Murphy stand-up routine – in much the same way “Good Morning Vietnam” bordered on a Robin Williams stand-up routine.  Many of Williams’ early films were excellent, but we always knew we were watching Williams.  In “Vietnam,” Williams was finally freed from the confines of a script, and allowed to bring his comedy to an actual character.  After “Vietnam,” Williams’ career blossomed; more serious roles followed, such as “Dead Poets Society,” “Awakenings,” and “Good Will Hunting.”  I hope Murphy’s career now follows the same trajectory.

As far as the Scott Alexander and Larry Karaszewski screenplay is concerned, the opening sequences are interesting, but it takes off when Moore gets in his mind that he’s going to make a movie.  Since he has no funding, and very little capital, he recruits UCLA film school students to act as cameraman, sound man, prop man, and so forth.  He enlists local writer and theatre operator Jerry Jones to write the screenplay.  Jones’ experimental theatre was founded to give voice to the underprivileged black audiences not represented by mainstream plays.  Jones, played by Keegan-Michael Key, spends much of his time refocusing Moore on the task at hand – making an important film for a black audience – and toning down Moore’s desire to include Kung Fu, female breasts, and car chases.  It’s humorous, but entirely understandable.

But if “Dolemite Is My Name” marks the triumphant return of Eddie Murphy, it certainly does so too for Wesley Snipes.  Long viewed as an action-hero actor, Snipes radiates off the screen as D’Urville Martin, an established actor who never quite rose to the upper echelon of African-American stars – although he did have small roles in “Guess Who’s Coming to Dinner?” and “Rosemary’s Baby.”  Martin is enlisted to direct “Dolemite,” and play the foil to Murphy’s starring role.  Snipes plays the character with all the pretentiousness one might expect.  Martin believes the entire “Dolemite” production is beneath him, and never passes up the opportunity to let others know.  It’s a funny character, and Snipes plays it to the hilt.  It may be his best job of acting ever.

Seeped in raw language and female nudity, “Dolemite Is My Name” is Murphy’s first R-rated film since 1999.  It also happens to be one of this year’s best pictures.  If you’re a fan of Murphy’s early screen work or his stand-up routines, you’ll love it.  If you have a soft spot for the blaxploitation genre, you’ll enjoy this film.  And if you’re simply a fan of the movies, “Dolemite Is My Name” is a wistful tribute to the art of film production and self-determination.  If ever there were a self-made man, it was Rudy Ray Moore.