DARCI LYNNE & FRIENDS – FRESH OUT OF THE BOX 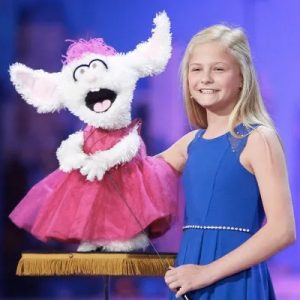 Winning NBC’s “America’s Got Talent” at just 12 years old by the most votes for a final performance in the history of the show, singer/ventriloquist Darci Lynne Farmer impresses audiences across the country with her sweetheart disposition and undeniable, show-stopping talent beyond her years. Accompanied by her musical friends including a diva-esque rabbit: Petunia, a shy and soulful mouse: Oscar and a sarcastic old woman: Edna – Farmer’s talents with ventriloquism is as skilled as it is adorable. Singing through her friends helped the young entertainer find a voice inside she didn’t know she had and helped her overcome a lifelong struggle with shyness. Following her big televised win, she has been featured on NBC’s “Little Big Shots,” Food Network’s “Kids Baking Championship,” “Ellen” and “TODAY.” Now Farmer and her humorous cast of characters are on the road bringing smiles to audiences across the country and with a special pit stop in Indianapolis along the way.