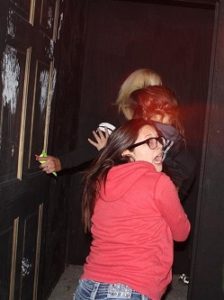 Indy’s only full-contact haunted house, opens for its 41st season at a new permanent location on Friday, Sept. 20. Located on the same city block as House of Trepidation (1929 S. Meridian) but remaining a totally separate and independent haunted attraction, the move presents a new one-stop-shop for Halloween thrill seekers in Indianapolis.

Nightmare on Edgewood owners and brothers Kevin and Paul Cook cite multiple reasons for the move and the opportunities that a permanent, year-round home presents.

“We will be able to remain open seasonally throughout the year (not just at Halloween time) and extend our regular season in the fall. We will also have more time to spend preparing our show,” Paul Cook said regarding the decision to relocate. “After 40 years in the same spot, we have simply outgrown our home at the Edgewood Athletic Association.”

The move to a permanent location not only allows Nightmare on Edgewood to leave the attraction set up for year-round work and improvements, but also doubles the attraction’s space, bringing the total count to nearly 30,000 square feet. Also new this year: covered, indoor waiting lines.

“We have moved, but you can still expect the same great traditions and the same intensity you’ve come to expect at our event,” Kevin Cook said.

Four haunted houses in one 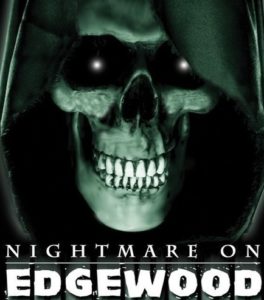 The four-part attraction will draw from the same themes as previous years, but in newly expanded rooms and scenery. In THE CABIN, guests will tip-toe through the backwoods home of the demented Conley family. Next, bear witness to the bizarre medical practices in place at EDGEWOOD SANITARIUM. Step right up and test your courage inside THE DARK CARNIVAL with sinister clowns lurking around every corner. A fourth, unnamed haunted attraction is still under construction, in addition to SHADOWS ESCAPE, Indiana’s only 3D audio sensory experience.

Established in 1978, this season marks Nightmare on Edgewood’s 41st year in operation. The Cook brothers acquired the haunt in 2009 and continue to uphold its reputation as Indy’s Most Intense Haunted House. Nearly 50 volunteer actors occupy the halls of Nightmare on Edgewood each season, while an additional 12-15 staff (including volunteers from the Greenwood Fire Department) assist with parking, ticket sales, and general maintenance and management of the haunt.

Gates and ticket booth opens at 6:30 p.m., haunts open at 7 p.m., and gates close at 10 p.m. on weekdays and 12 midnight on weekends. Tickets start at $25 for all three attractions. Fast Pass tickets are $35, which guarantee half the wait at the head of the line (note: a limited number of Fast Pass tickets is sold each night). Coupons and tickets are available on the Nightmare on Edgewood website, www.nightmareonedgewood.com.

Nightmare on Edgewood proudly supports the local community by giving to local Boy Scout Troops 266 & 264, Pink Ribbon Connection, Indiana Foster and Adoptive Parents, Haunters Against Hate, and many other event fundraisers. For more information on how these funds benefit the community, please contact Danielle Look (317-899-9619); media@nightmareonedgewood.com).