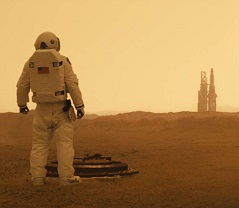 Clifford McBride was the most famous and decorated astronaut in history.  In his final mission, he led what was known as the Lima Project on a quest to find intelligent life in the outer reaches of the solar system.  NASA lost communication with the Lima Project sixteen years ago, as its crew approached Neptune.

Now, mysterious power surges emanating from Neptune convince SpaceCom (NASA’s apparent replacement) that the Lima Project may have stalled at Neptune, and that some of the crew may still be alive.  McBride’s son Roy, himself a decorated astronaut, is enlisted to fly to Mars and establish communication with his father.

Different from most sci-fi

Already, we can tell James Gray’s “Ad Astra” is going to be more than a by-the-numbers sci-fi flick.  From its conception, “Ad Astra” is set up to work on several different levels.  Yes, there is the success (or lack thereof) of the mission itself, but there is also the father/son relationship that, to my knowledge, has never been explored within the context of science fiction.  We learn that the elder McBride has been away from earth for 29 years – most of Roy McBride’s life.  And that Roy’s recollections of his father are not always positive.  Still, he loves his father – or at least the memory of his father – and he feels obligated to take on the mission. 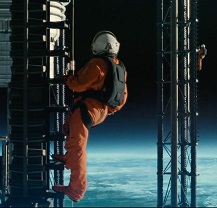 Unlike most science fiction, “Ad Astra” is not chock full of action sequences.  Sure, there are some; but much of Gray’s and Ethan Gross’ original screenplay occurs in the vast nothingness of space travel – equating “Ad Astra” more to “2001: A Space Odyssey” or (more recently) “Gravity” than to the “Star Wars” genre.  Add to the welcome “down time” progressions the younger McBride’s ever-present, yet not overbearing, voice-over descriptions of his feelings and emotions.  This ethereal touch likens “Ad Astra” to much of Terrence Malick’s work – in which the thoughts of the characters are more important than their actual dialogue.  Here, the dialogue is almost entirely in service to the plot; the voice-over lets us inside McBride’s mind.

As Roy McBride, Brad Pitt turns in his best performance in years – subdued and intellectual, yet totally prepared to carry out the requirements of his chosen career at every turn.  Pitt’s performance is so understated, it doesn’t even seem as though he’s acting.  I do question, however, the reality of maintaining a handsome 5:00 shadow at every waking moment of space travel.

Tommy Lee Jones plays the elder McBride – primarily in flashbacks, until met by his son during the film’s climax.  Some critics have associated “Ad Astra” to “Apocalypse Now,” because of the “search and find” structure of its screenplay.  But I find such a comparison does a disservice to “Ad Astra.”  Not only are the loose ends of the plot tied up during the finale, but Jones and Pitt clear the air of what remains of their interpersonal relationship – in contrast to Marlon Brando’s ten minutes of incoherent ramblings at the end of “Apocalypse Now.” 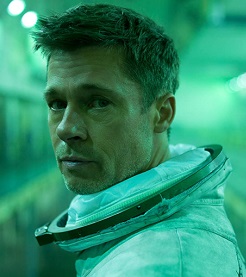 Donald Sutherland and Ruth Negga turn in strong supporting performances, but “Ad Astra” is Pitt’s film to win or lose – and he does a magnificent job.  I cannot say I love “Ad Astra.”  I respect it as a strong work of filmmaking – sci-fi or otherwise.  But I do not feel transported by these characters as I do when I watch “Gravity” or even “The Martian.”  Other than its intangible nature, comparisons to “2001” are off, as the intricacies of the “Ad Astra” plot are never far from our conscious mind.  We’re always keenly aware of Roy’s mission, even as his narrative enlightens us to his deepest thoughts.

“Ad Astra” exists as a triumph in filmmaking more than it does as a piece of work we’ll cherish the rest of our lives.  The father-son angle is unique in science fiction cinema, and the quiet, thought-provoking nature of the film is a welcome change, but the progression of the plot is, dare I say, routine.  When “Ad Astra” is stripped of its “cinema” – that is, the bells and whistles Gray poured into this project – what’s left is essentially a standard sci-fi story about a lone hero in quest of a potentially rogue player in the outer reaches of space.  Because of this, the look and feel of “Ad Astra” overpower the story itself.