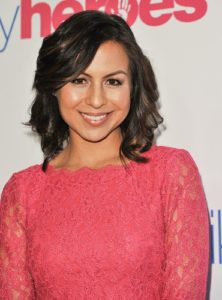 Anjelah Johnson-Reyes was born and raised in San Jose, Calif., and is of Mexican and Native American descent. From stand-up comedy to television to film, and even to NFL cheerleading, Johnson has done it all. Her viral YouTube video of her impression of a Vietnamese nail salon employee, “Nail Salon,” was her ticket to fame in 2007. Later that year she joined the cast of sketch comedy show MADtv as a featured performer. There, her self-scripted character Bon Qui Qui – a disgruntled fast food employee with no filter – also gained major attention from audiences worldwide. Johnson released three songs and two music videos as Bon Qui Qui, leading to a record deal with Warner Bros. Records, under which she has released one full album, “Gold Plated Dreams,” and one Christmas EP, “Merry Hoodmas.” Johnson has also recorded four one-hour comedy specials over the past 10 years, including “That’s How We Do It,” “The Homecoming Show,” “Not Fancy,” and “Mahalo and Goodnight.”