After building overwhelming anticipation, GRAMMY® nominated multiplatinum powerhouse trio–Jonas Brothers—announce the details for their 40-city Happiness Begins Tour this summer and fall with special guests Bebe Rexha and Jordan McGraw.  The announcement coincides with the launch of the pre-order for the band’s highly anticipated comeback album Happiness Begins. The tour will make a stop in downtown Indianapolis on Friday, September 13, 2019 at Bankers Life Fieldhouse.

About the Jonas Brothers 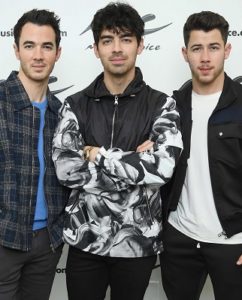 The Happiness Begins pre-order will include instant grat downloads of the band’s hit singles “Sucker” and “Cool,” produced by GRAMMY® Award-winning songwriter, producer, and lead singer of the multi-platinum band OneRepublic, Ryan Tedder. The third instant grat titled “Only Human,” produced by GRAMMY® Award-winning producer Shellback, will follow. Not only will this be the group’s first album since 2009, but it stands out as one of 2019’s most anticipated records.

“Sucker” now exceeds 445 million global streams to date. During release week, it clinched #1 on Apple Music, #1 on Spotify, and #1 on iTunes in North America. Globally, it reached #1 on Apple Music, #1 on YouTube, #1 on Twitter, and #2 on Spotify, as well as the #1 Streaming Song and #1 Digital Song. Speaking of making history, the rollout of “Sucker” marked “the first time a band debuted at #1 on the Billboard Hot 100 chart this century.” Continuing the runaway success, “Cool” has notched 70 million global streams and soared to #1 on iTunes Overall Top Songs Chart and Top Music Videos Chart.

Tickets are on sale to the general public through Ticketmaster.com.