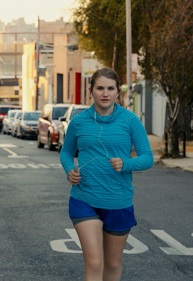 Brittany is a 30-year-old Philadelphia native making her way in the fast-paced world of New York City life.  She has a dead-end job, no boyfriend, and no real future.  Furthermore, she’s overweight.  Not morbidly obese, mind you.  But heavier than she should be.  She doesn’t take care of her body – subsisting on a diet of fast food and alcoholic beverages.  Brittany has a roommate, Gretchen, but theirs is more a relationship of convenience than that of best friends.

The unlikely trio forge a plan to run together every day in hopes of competing in the New York City Marathon the following year.  Such is the setup for playwright Paul Downs Colaizzo’s first feature film, “Brittany Runs a Marathon.”  And lest you think you know where this story is headed, you don’t.  For a plot line no more intriguing than that of a young woman who finally begins to take care of her body, “Brittany Runs a Marathon” turns out to be a comedy with more heart than originally meets the eye.

Brittany’s defense, if you will, is her sense of humor.  At work, in relationships, and with her family, Brittany has an inherent ability to use her slightly sarcastic outlook to cope with all that life throws her way.  Humor is her way of taking life’s lemons and making the proverbial lemonade.  Consequently, the first half of “Brittany Runs a Marathon” is a very funny motion picture.

But the second half is more earnest and heartfelt.  As you might expect, “Brittany Runs a Marathon” is about more than getting in physical shape.  It’s about getting in emotional and spiritual shape as well.  In a wonderful starring performance, Jillian Bell’s Brittany takes stock of her life, throws out the bad, and embraces the good.  Again, as you might expect, there are a few too many earnest, heartfelt discussions between Brittany and her family members, friends, and running buddies.

There is also one false scene at a birthday party, in which the now physically fit Brittany insults an overweight girl.  I call this a “Hollywood scene” – written by screenwriters (Colaizzo himself, in this case) that would never happen in real life.  But other than these minor quibbles, I was impressed with “Brittany Runs a Marathon.” 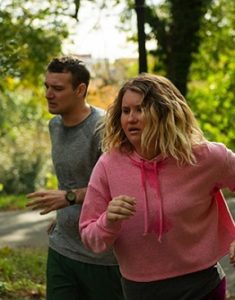 Former “Saturday Night Live” cast member Michaela Watkins is Catherine, and Micah Stock shines as the overly conscientious Seth.  Also notable is Utkarsh Ambudkar as Jern, a house-sitter for a wealthy couple who hires Brittany to take care of their dog while they are out of the country.  In the throes of her training regimen, Brittany views the lazy Jern as a throwback to her earlier lifestyle – and she resents him for taking his own life situation so cavalierly.  The two get along like oil and water, at least at first, and their rapport is hilarious.

The dialogue is sharp and funny throughout, and I believe Colaizzo may have a real future – as a screenwriter, director, or both.

“Brittany Runs a Marathon” reminds me most of last year’s “Tully,” in which Charlize Theron plays a mother who hires a night-time nanny to take care of her new baby.  That one was also funny, and it too took a surprising turn into more serious matter about halfway through.  “Brittany Runs a Marathon” isn’t quite in that company, but it’s a good solid effort – and it joins “The Farewell” as one of this summer’s pleasant delights.