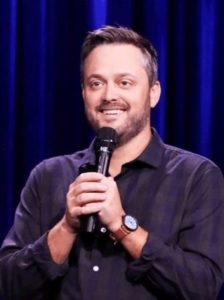 As the son of a former clown turned world-class magician, it’s easy to see how Nate Bargatze gained his sense of humor. Bargatze has followed in his father’s footsteps into the entertainment business – just lacking the red nose and the magic wand. The Tennessee-native has found major success with his comedy. Bargatze has appeared multiple times on “Late Night With Conan O’Brien” and was one of the first comedians to perform on “The Tonight Show Starring Jimmy Fallon.” He also joined Fallon on his “Clean Cut Comedy Tour” in 2013. Bargatze released a half-hour Netflix special in 2017 as part of a six-part original series, “The Standups.” Then in March 2019, he released an hour-long Netflix special titles “The Tennessee Kid.” He was mentioned in Rolling Stone Magazine as a “comic who should be big” and in Esquire as “one of the top up-and-coming comics.”