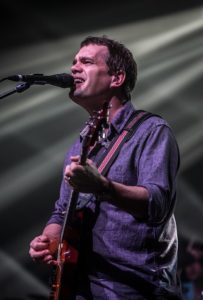 The music of Umphrey’s McGee unfolds like an unpredictable conversation among longtime friends. Its six participants—Brendan Bayliss [guitar, vocals], Jake Cinninger [guitar, vocals], Joel Cummins [keyboards, piano, vocals], Andy Farag [percussion], Kris Myers [drums, vocals], and Ryan Stasik [bass]—know just how to communicate with each other on stage and in the studio. The band’s camaraderie shines through in their inimitable interplay, which finds them at the pinnacle of their craft and groove as a band. That chemistry defines the approach—which sees Umphrey’s McGee hone their songwriting to its sharpest point to date.

Over 2,200 gigs and 5 million tracks sold later, they’ve enjoyed countless milestones. 2002 saw them perform at the first-ever Bonnaroo and sell more CDs than any other act on the bill.