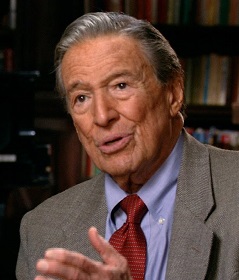 For a while during the 1970s and ‘80s, the number-one television series in America was “60 Minutes,” a newsmagazine show in which hosts Mike Wallace and Morley Safer would investigate everything from insurance scams to political corruption.  Or they might interview high-profile celebrities.  It was the forerunner of many of today’s news-fluff shows, but with more bite.  And more social relevance.

The fact that “60 Minutes” was ever the highest-rated show – during the golden era of classic TV sitcoms and variety shows – is somewhat miraculous.  A serious, relatively dry, non-scripted extension of CBS News?  “60 Minutes” debuted in 1968 as an afterthought.  It was an inexpensive method of filling an hour of Sunday evening prime time.  The powers that be at CBS didn’t think it would last.  And its ratings those first few years were in the proverbial toilet.

But then something clicked.  America began to take notice during the Watergate scandal.  “60 Minutes” host Mike Wallace knew most of the movers and shakers of the Nixon administration, as he had covered Nixon’s 1968 presidential campaign as a reporter for CBS News.  Therefore, it was relatively easy for Wallace to gain access to Nixon’s henchmen during the Watergate years.  Ratings for “60 Minutes” shot through the roof.  America was hooked.  And Mike Wallace quickly became someone Americans felt comfortable inviting into their homes every Sunday evening.  Not because he came across as a nice guy.  In fact, just the opposite.  Wallace had the tenacity to ask the tough questions; to make his interview subjects sweat.  Watching a Wallace interview might have made us a little uncomfortable.  But we knew he’d get to the truth.  And in a time when the truth seemed easier to mask, we knew Wallace would be able to set the record straight. 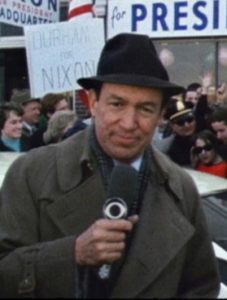 Israeli director Avi Belkin’s first English-language film is “Mike Wallace is Here” – a documentary tracing the career of one of America’s most beloved newsmen, and a tribute to an era in which television news (and its offshoots) were respected and trusted.  Some might argue Wallace’s brash, take-no-prisoners interview style was the precursor to today’s cable-news shouting matches.  But Wallace (and his “60 Minutes” partner Morley Safer) always treated their subjects with respect – even while grilling them about alleged high crimes and misdemeanors.

“Mike Wallace is Here” tracks Wallace’s early days as a TV pitchman – harking everything from dish soap to cigarettes.  He then migrated into daytime game shows, before landing his first interview program, “The Mike Wallace Interview” – a late-night half-hour interview show on the fledgling ABC network.  It’s ratings (against NBC’s popular “Tonight Show”) were dismal, but it’s in this archive footage that we see Wallace’s tough interview style take shape – the same style that would propel him to television stardom years later.

In “Mike Wallace is Here,” Belkin employs no voice-over narration.  We see certain figures (such as Safer) speaking about Mike Wallace – and we see Wallace as an interview subject speaking about his own life – but Belkin’s documentary might have benefited from an overarching narrator to occasionally punctuate the archive footage and provide some structure to the proceedings.  Belkin does occasionally provide a year to focus our attention to a specific moment in time – such as “1979” immediately preceding a segment on Wallace’s interview with the Ayatollah Khomeini in Iran – access not given to any other American reporter.

“Mike Wallace is Here” tends to be a bit scattershot, as Belkin’s footage jumps back and forth over time more liberally than I would have preferred.  It generally follows a chronological timeline, but the interview footage is sometimes all over the map.

Having said that, “Mike Wallace is Here” is a fascinating look at a fascinating journalist.  Wallace lived an eventful life, and was able to interview some of the most important movers and shakers in world history.  What Belkin does very well is introduce us to a little of Wallace’s private life.  Wallace admits he was an absent father, and a terrible husband.  Many of us are likely unaware Wallace lost a son in a tragic accident in Greece in 1962.  “Mike Wallace is Here” shares just enough of Wallace’s personal life to endear us to him, and to humanize a man who often came off as serious and rough on TV.

I also like the way Belkin shows us (more than once) that Wallace never personally accused any of his subjects of the high crimes and misdemeanors of which they may have been suspected.  He always prefaced the accusations with, “It has been said that…” or “Your adversary has accused you of…”  Contrast that style to the personal vendettas upon which much cable news chatter is based, and a voice-over narrator is almost not required to connect these dots.  Perhaps this is why Belkin chose not to employ external narration.  Sometimes the archive footage of Wallace – particularly when placed next to that of Bill O’Reilly – is all we need to draw our own conclusions on the downward trajectory of television news over the past half century.

Tribute to an era

“Mike Wallace is Here” is a tribute to a man, but it also works as a tribute to an era in which TV newsmen were trusted to find the truth in a world in which many leaders chose to hide it in favor of personal gain.  We could only be so lucky as to have another Mike Wallace come along now to save television news from itself.