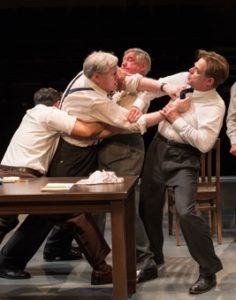 A young man’s life hangs in the balance as a trial jury meets behind closed doors to debate his guilt or innocence. Did he kill his father? Or is there reasonable doubt? What is justice, and how do we achieve it? You will be on the edge of your seat as a dozen men with different viewpoints try to agree on one verdict. This classic American drama from the 1950s could have been written yesterday with its provocative look at power, prejudice, and clashing perspectives.

From the artistic director

“The season opens with the classic American 1950s courtroom drama Twelve Angry Men. We select a play of this nature to unite the adult and student populations with a play that holds power for its strong dramatic tension, as well as its heated debates on the efficacy of the American justice system. It will pack a content and a style punch, and we’re excited to open our season with this quintessentially American high-stakes debate play that feels ripped out of today’s headlines.” –Janet Allen, Executive Artistic Director

APPROXIMATE RUN TIME: 1 hour and 40 minutes, with no intermission

Twelve Angry Men is a classic American drama that contains profanity and mild violence. Recommended for patrons 9th grade and above.