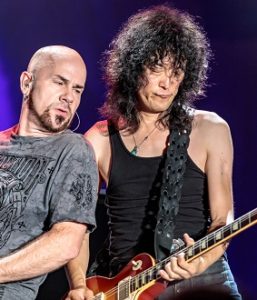 Hot on the heels of drummer Jason Bonham’s inspired collaboration with Umphrey’s McGee at this year’s Lockn’ Festival comes word of an extensive Jason Bonham’s Led Zeppelin Evening Tour. The son of the late Led Zeppelin drummer John Bonham will take his tribute to his dad’s band on the road in the U.S. this summer. Following his participation in the monumental reunion of Led Zeppelin at London’s O2 Arena in 2007, drummer Jason Bonham decided to take the music his father was such a huge part of out on the road. Best described as a band that perfectly recreates the music of Robert Plant, Jimmy Page, John Paul Jones, and John Bonham, Bonham’s Led Zeppelin Evening not only celebrates one of music’s most iconic bands but also the life of Bonham’s late father, who died in 1980. Included in this show is visual imagery, which incorporates rare photographs and videos from Zeppelin’s past and Bonham’s personal collection.