Country music superstar Brad Paisley has announced his 2019 World Tour, which kicks off May 30 in Albuquerque, NM. Special guests on the U. S. tour dates will be Platinum-selling hitmaker Chris Lane and rising singer-songwriter Riley Green. The tour will make a stop at Ruoff Home Mortgage Music Center (nominated for ACM Large Capacity Venue of the Year) located in Noblesville, Indiana on Saturday, July 20, 2019. 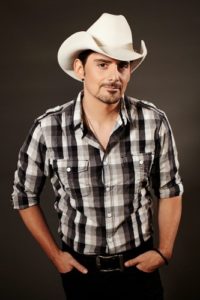 Brad Paisley is a critically acclaimed singer, songwriter, guitarist, and entertainer whose talents have earned him numerous awards, including three GRAMMYs, two American Music Awards, 14 Academy of Country Music Awards, and 14 Country Music Association Awards (including Entertainer of the Year), among many others. He has been a proud member of the Grand Ole Opry since 2001. Paisley has written 21 of his 24 #1 hits and has accumulated over 20 million career total worldwide album sales, track downloads, and streaming equivalents. His 2019 World Tour was recently announced and kicks off May 30 and concludes Oct. 13 after traveling across the U.S. and also several dates in Canada and Europe. His current single is a passionate love song titled “My Miracle.” Paisley has partnered with Boot Barn® and developed an exclusive line of jeans, hats, T-shirts, jewelry, belts, and woven shirts called Moonshine Spirit by Brad Paisley.

Tickets for Brad Paisley’s 2019 World Tour, promoted by Live Nation, are on sale now at www.Megaticket.com. VIP packages will be available for the 2019 World Tour. Find a complete listing of tour dates, including additional Brad Paisley concert stops for 2019, VIP package details and purchase tickets at BradPaisley.com.