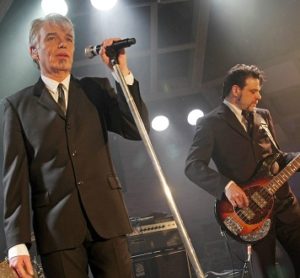 Consisting of actor, musician, and drummer Billy Bob “Bud” Thornton, J.D. Andrews on bass, guitars, and vocals, and Michael Wayne Butler on guitars and lap steel, Billy Bob Thornton and The Boxmasters put a unique spin on the genre by adding a dash of British Invasion-era rock to the mix.

In late 2017 and 2018, The Boxmasters teamed up with legendary engineer/producer Geoff Emerick for an album that Emerick has called, “one of the most exciting projects I’ve worked on since The Beatles.” The album, “Speck,” was released on June 7 through KeenTone Records and Thirty Tigers. Emerick, however, died on October 2, 2018, before the album was released.

Known for taking over the engineer’s chair on The Beatles’ albums “Revolver,” “Sergeant Pepper’s Lonely Hearts Club Band,” and others, Emerick added a familiar sonic touch to the sound of The Boxmasters, who have been Beatles and British Invasion fans. His work on albums by Badfinger, The Zombies, America, and Paul McCartney, among many others, has always been a huge influence on The Boxmasters.

According to the Ponte Vedra Concert Hall, “Speck” touches on all of The Boxmasters’ influences, including The Beatles, The Byrds, and Big Star, but there are new sonic touches as well. Ukulele, cardboard boxes, and The Beatles’ famous “tea towels on the drums” trick pop up on songs throughout the album.

Billy Bob “Bud” Thornton said the album deals with everything from personal relationships to politics to social issues.

“The theme being that we are all specks in this universe trying to navigate it, during trying times in the world we still have our own loves, desires, problems, and dreams as individuals,” Thornton said. “We’re just little humans. No matter what our standing is in society.”

The Boxmasters have also been working on finishing another long-awaited project titled, “And Then We Drove,” as well as contributing music to an upcoming independent feature film titled “Spare Room.”

General Admission tickets are on sale now for $40 in advance at eventbrite.com and hifiindy.com. Ticket prices increase to $50 day of show. VIP Packages are available for purchase directly through the artist website at theboxmasters.com, which include a photo op, VIP merch package, and exclusive VIP pass. HI-FI is a 21+ venue.