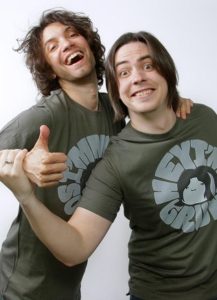 The Final Party with Game Grumps is here! Join us on this very special summer tour with Arin and Danny as we retire the present live format. If you’re a gamer, you know the Game Grumps. Known for the wildly popular YouTube channel with more than three million subscribers that includes weird shows like Table Flip, Steam Train, and How Bout This Game. Always working on something new and exciting, the cornerstone of any Game Grumps video consists of animator / voice actor Arin Hanson and comedian/musician Dan Avidan (and sometimes other special guests) playing video games, from arcade classics to the latest releases, and making fun of them. Well, detailing their experiences and reviewing their qualities, but mostly making fun of them. Now they’re taking their show on the road for an extensive North American tour. The guys will be playing games, making jokes, and having a blast in front of a live audience!