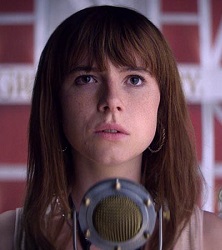 Rose-Lynn Harlan wants to be a country singer.  She’s got a good voice, and fronts a local band on occasion when they play some of the area watering holes.  But Rose’s dream faces several major obstacles.  First, her location is rural Scotland.  Second, she’s just been released from prison.  And third, she has no money.  It would appear that Rose’s dream shall remain just that – a dream.

But if Rose has one thing it’s determination, and watching her achieve her ambition is the joy of British director Tom Harper’s new effort “Wild Rose” – featuring a star-making turn by Irish singer-actress Jessie Buckley.  Little is made of Rose’s recent stint in the hoosegow; fortunately, Nicole Taylor’s original screenplay doesn’t burden us with a lot of backstory.  We know it had something to do with selling heroin.  Rose says she’s innocent; she served time anyway.  Enough said.

We do know she’s been locked up for some time.  Long enough that her young daughter and son have no recollection of her.  When Rose returns to her mother Marian’s home, the kids are aware who she is and that she’s been released from prison, but that’s the extent of their knowledge.  When Rose lands a nearby apartment, her son runs to his grandmother in tears because he doesn’t want to be taken away by this strange new woman.  It’s a heartbreaking scene, in a film full of moving episodes.  We can tell from early on “Wild Rose” is going to be more than merely a story about a country star wannabe.

With no marketable skills – save for that voice and stage presence – Rose lands a job as a cleaning lady for an upper-middle class single mother of two kids, a hair older than Rose’s.  Her name is Susannah, and she gives Rose the encouragement she needs to pursue her goal of musical stardom.  Susannah’s confidence provides the yin to Marian’s real-world yang.  While Marian certainly respects her daughter’s aspiration, her concerns are rooted in the here and now.  How will Rose care for her children?  How will she pay the rent?  Her direct and occasionally condescending motherly advice is often not well-received by Rose.  And this mother-daughter relationship causes “Wild Rose” to work on a whole other level from what we might expect from a story about a burgeoning country singer.  To wit, many screenwriters wouldn’t have even written children into the story, preferring to concentrate on Rose’s career objectives and musical talent.

This family dynamic gives “Wild Rose” its heart; Rose’s singing provides its soul.  As Marian, veteran British actress Julie Walters adds another memorable character to her exemplary body of work.  And as Susannah, British character actress Sophie Okonedo turns in her best performance since “The Secret Life of Bees,” and possibly even since “Hotel Rwanda.”  But the real star here is Jessie Buckley, who shines brightest when she’s on stage – be it at a small-town Scottish dive, or on stage (finally) in Nashville. 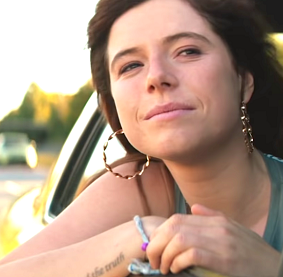 Taylor’s screenplay takes its sweet time moving the action across the Atlantic.  We’re forced to endure the long waiting game right along with Rose.  And while this anticipation might have resulted in a huge payoff in a typical Hollywood rendition of similar material, Harper and Taylor don’t go for the obvious cinematic reward.

Nashville looks great in “Wild Rose.”  Its bright lights and multi-colored hues are a sharp contrast to the dull grey tones of Rose’s Scottish village.  As music blares from every street corner, Rose believes she’s finally arrived in heaven.  But her reality is that Nashville is crawling with hundreds of people exactly like her – people with enough talent to be the next big sensation.  But only so many can succeed at this very difficult game.  Does Rose have what it takes?

I can’t provide any more detail without spoiling what must surely go down as one of the most satisfying endings in recent motion picture history.  Satisfying for the realistic way in which all the story’s loose ends are reconciled, rather than for feeding our desire to see Rose succeed in the music industry.  There’s obviously more to “Wild Rose” than an account of an aspiring singer.  This is a richly textured drama about life, and when Rose belts out the film’s final number, the effect is no less invigorating than when Lady Gaga takes the big stage for the first time in “A Star is Born.”

“Wild Rose” ranks as one of this year’s very best pictures, and I know the year is young, but Jessie Buckley deserves strong consideration for a Best Actress nomination.  Hers is the kind of career-defining musical performance personified by Bette Midler in “The Rose” or Barbra Streisand in “Funny Girl.”  Or, yes, Lady Gaga just last year in “A Star is Born.”  Buckley is that good!  And the story is engaging and heartwarming.  This one’s a winner.