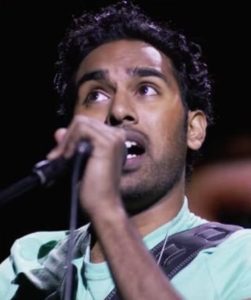 How’s this for an implausible set-up?  Jack Malik is a young, struggling singer-songwriter of Indian descent living and performing in an English seaside town.  He has a manager, but she can only book him so many places.  Tiring of performing company picnics and children’s birthday parties, Jack decides to chuck it all and give up his dream of musical stardom, when the strangest thing happens.  All the electricity goes off for twelve seconds.  All over the world.  At once.

And when things return to normal?  No one remembers the Beatles.  Really.  Just go with me here.  Jack is hanging out with friends one sunny afternoon strumming his guitar, when he breaks into a chorus of the Beatles classic “Yesterday.”  His friends are astonished.  They comment that this is the best song he’s ever written.  When Jack attributes the work, obviously, to the Beatles, he’s met with looks of confusion.  Who are these Beatles of whom Jack speaks?

Assuming this is some practical joke meant to cheer him up, Jack high-tails it home where he promptly googles The Beatles, and finds… The Beetle.  An insect.  Even a search for “John, Paul, George, and Ringo” turns up a page on Pope John Paul II.  It’s as though they never existed.  The Rolling Stones?  Sure.  There they are with Mick Jagger preening about all over the worldwide web.  The Beach Boys?  Yep.  Frank Sinatra?  Check.  Just no Beatles.

So Jack latches onto a brilliant idea.  What if he reconstructed all those great Beatles songs from memory (as the music apparently doesn’t exist) and pawned them off as his own?  Worth a try, right?  Might finally energize his career, right?  Boy, does it ever!  Next thing you know, Ed Sheeran comes over to Jack’s house – and yes, Jack still lives in his parents’ basement – to invite him to perform as his opening act on an upcoming world tour.  In Los Angeles, Jack gets a real agent, who promotes him as the greatest singer-songwriter in history.  The talk show appearances follow.  Young girls chase him through airports.  It’s almost as though we’re watching a modern-day version of “A Hard Day’s Night.”

But alas, this exercise in farfetched but immensely absorbing entertainment is “Yesterday,” the latest from British director Danny Boyle (“Slumdog Millionaire,” “Trainspotting”).  To say “Yesterday” is light as a feather is a bit of an understatement.  Sure, we must suspend any connection to reality in order to fully absorb the material, but boy is this a fun ride!  “Yesterday” is one of the most purely enjoyable films to come along in years.

As Jack, Himesh Patel plays the material straight – without the slightest bit of a wink in his eye toward the camera.  His investment in Richard Curtis’ original screenplay pays off in droves, as we can’t help but root for Jack – even though we know he’s blatantly stealing the Beatles’ material.  Then again, if they never existed, is it really thievery?  We’ve all had songs stuck in our heads whose origins are uncertain.  Isn’t that Jack’s reality?

Jack promptly goes to work in his small bedroom to compose (or re-compose) every Beatles song he can recall.  His film-long struggle to reconstruct the lyrics to “Eleanor Rigby” is one of “Yesterday’s” most humorous running gags.  As is the fact that Coca-Cola apparently never existed either.  The strange looks he receives when he asks for a Coke are a continual reminder that he must always ask for a Pepsi.

There’s also a funny early scene in which Jack attempts to perform his new composition “Let It Be” for his parents.  But the doorbell keeps ringing.  And cell phones keep going off.  Having performed the opening line three times, Jack finally gives up.  Of course, the joke is on his parents, as “Let It Be” remains one of the great songs of the rock era.

As Jack’s career takes off, he finds himself unable to revel in the joy that is the stardom he’s always dreamed of.  First, he can’t separate himself from the fact that he knows he’s stealing the musical material of Lennon and McCartney, even though he’s the only person who knows of them.  And second, he and his original agent Ellie (Lily James from “Downton Abbey”) have very deep feelings for one another.  Jack and Ellie miss each other, and Jack almost feels as though he’s betrayed her by advancing his career while she continues to teach school in rural England.

Their relationship – initially more of a brother/sister affiliation – is the anchor which roots the screenplay in reality.  Relationships are universal – whether the Beatles ever existed or not.  And theirs is more than just a side story; it’s the real meat of “Yesterday.”  It’s their bond which raises “Yesterday” above the level of that of a summertime fantasy movie.  Boyle and Curtis nurture the Jack/Ellie affair methodically, as it slowly evolves from a professional relationship into a more meaningful form of love.  While we find ourselves rooting for them from the start, rush them into the sack too soon and they lose each other’s respect.  On the other hand, if they remain “brother-sister,” the story never advances.  It’s a real tightrope act, and the filmmakers pull it off masterfully.

Ed Sheeran plays himself (as Jack’s biggest fan), and Kate McKinnon (of “Saturday Night Live”) turns in the film’s best comic relief performance as Debra – the stereotyped materialistic Los Angeles agent, forever hoping to get rich riding the coattails of the “next big thing” in the music industry.  At times, McKinnon almost overplays her hand – it’s as though she’s acting in a completely different movie – but Boyle keeps her enthusiasm in check most of the time.  To the point where we laugh at her without letting her distract from the meat of “Yesterday.”

In perhaps the film’s best supporting performance, British actor Joel Fry practically steals each of his scenes as Jack’s good-for-nothing friend Rocky, who accompanies him on his world tour and beyond.  He’s socially oblivious and mildly obnoxious, but very much in tune with Jack’s needs – from his career to his relationship with Ellie.  Rocky is the proverbial glue that holds both Jack’s life (and Curtis’ screenplay) together.

As a side-note, “Yesterday” is so absorbing you don’t even have to be a Beatles fan to enjoy this film.  However, “Yesterday” also works as a tribute to the greatest band of all time.  Every time Jack performs one of their songs, we marvel that any four musicians could produce this much classic material.  And all before any of them reached the age of thirty!

This is one of the year’s best films, lightweight though it may seem.  “Yesterday” is pure entertainment – the kind of crowd-pleaser we all love, provided it’s done right.  And it is.  Not too sentimental, “Yesterday” hits all the right emotional notes at all the appropriate times.  And it has an ending sure to please.  If you’re after two hours of fantastically charming and affecting escapism, this is your ticket for the summer.