The Failure to Zig Zag 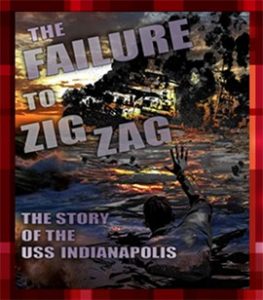 The last show of Carmel Community Players‘ 2018-2019 Season is one of their most exciting endeavors to date. THE FAILURE TO ZIG ZAG is the story of the USS Indianapolis and the heroes aboard – some who survived and those who didn’t.

They first were sent on a secret mission to deliver the uranium and other parts of the bomb set to be dropped in Japan to end the war. On their way back to their base, they were hit and the ship sank in shark-infested waters.

This is the story of the mission, the survivors, and their captain, who eventually was court marshalled for “failing to zig zag” as a defense to being hit by submarines in the vacinity.

USS Indianapolis Survivors Reunion
The show runs from July 19 to 28 at The Cat in Carmel. The performance dates are the same time the survivors meet every year for a reunion in Indianapolis.