On Sale Date and Time are now in the works and TBA.

or check in at www.oldnationalcentre.com. 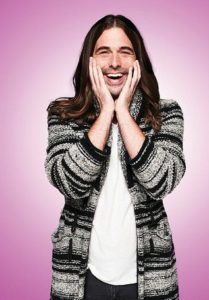 Television personality, Emmy nominee, and hairstylist to the stars, Jonathan Van Ness has quickly become known in the entertainment industry for his fabulous, unstoppable energy. It is his belief that great hair is best served with a side of witty banter. After learning how to cut, style, and color hair at Aveda Institute for Hair, Jonathan then moved to Los Angeles and landed a role as an assistant at the Sally Hershberger Salon (famous for creating Meg Ryan’s shag cut). Next he ventured out on his own having grown his own clientele while also working as a groomer for HBO on series including “Game of Thrones” and “True Blood.” In 2013 Jonathan launched his own salon, Mojo Hair with business partner Monique Northrop.

Hairstylist to the stars

His celebrity clientele continued to build, working with names such as: Margaret Cho, Denise Bidot, Tess Holliday, Kit Harrington, Jeffrey Self, and Esme Bianco, to name a few He can also be found on the east coast monthly, taming tresses at Hairstory Studio in NYC on Fifth Avenue. Jonathan can be seen starring on Netflix’s “Queer Eye,” which premiered in February 2018; the hit reboot of the Emmy Award winning series “Queer Eye for the Straight Guy.” Jonathan shines as the show’s groomer, hair guru, and self-care advocate. “Queer Eye” is set to return for Season 2 on June 15th. In addition to “Queer Eye” Jonathan stars on the Emmy-nominated series “Gay of Thrones,” (Funny or Die) a witty social commentary series recapping HBO’s “Game of Thrones.” Launched in 2013, the series is now in its seventh season and garnered an Emmy nomination in 2016 for ‘Outstanding Short Form Variety Series.’