STEVE EARLE AND THE DUKES 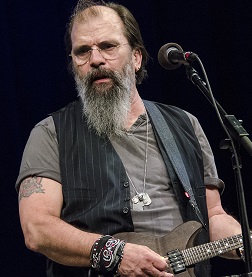 Steve Earle reports that being the 19-year-old bass player in folk legend Guy Clark’s band was “a gas.” More than 40 years later, Steve Earle honors his friend and mentor, who passed on in 2016, with his latest album “GUY.” Earle and his current, perhaps best ever, bunch of Dukes take on Clark’s songs with a spirit of reverent glee and invention. The tunes featured on “GUY” are all over the place and so is the band, offering max energy on such disparate entries as the bluegrass rave-up “Sis Draper” and talking blues memoir of “Texas 1947.” Earle’s raw vocal on the sweet, sad “That Old Time Feeling” is heartbreaking, sounding close enough to the grave as to be doing a duet with his dead friend. But in the end “GUY” leads the listener back to its beginning, namely Guy Clark, which is what any good “tribute” should do.