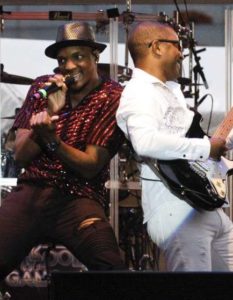 Kool & the Gang, which has received countless awards for its chart-topping funk, R&B, and pop hits, will open the Miller Lite Carb Day Concert on Friday, May 24, 2019 at the Indianapolis Motor Speedway.

Rock band Foreigner is headlining the show on one of the most exciting days in the Month of May at the Indianapolis Motor Speedway, creating a legendary show featuring two of the biggest-selling groups in musical history. The concert starts at 3:30 p.m. on the Miller Lite Stage inside Turn 4 of the IMS oval.

Tickets are on sale now at IMS.com, by calling 800-822-INDY (4639) or 317-492-6700, or by visiting the IMS Ticket Office at the IMS Administration Building. General Admission prices start at $30. Special Concert Pit access also is available for an additional $20, and a limited number of VIP Deck tickets are available for $250.

All General Admission and VIP Deck tickets include admission to the concert and to on-track activities that day at IMS, which include the final practice for the 103rd Indianapolis 500, the Freedom 100 Indy Lights race, and the Indy 500 Pit Stop Challenge.

About Kool & the Gang

In 1969, Kool & the Gang released their self-titled debut album. It was the introduction to a theme, music is the message, that Kool & the Gang stands by today. The instrumental album was an expression of their deep love of music. It was also an introduction to their signature sound and the fierce horn arrangements created by Khalis, Dee Tee, and Spike. Their debut album spawned their first Billboard R&B-charted single, “Kool & the Gang,” and later “Let the Music Take Your Mind.” 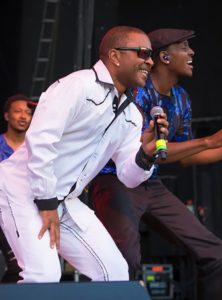 The band’s stellar reputation grew with each album, but 1973’s gold disc “Wild & Peaceful” took Kool & the Gang to another level (No. 6 R&B, No. 33 Pop), spurred by the immortal party anthems “Funky Stuff,” “Hollywood Swinging” and the platinum smash “Jungle Boogie.” Hits like Higher Plane (No. 1 R&B), the classic “Summer Madness” (featured on the Grammy-winning movie soundtrack “Rocky“), and LPs “Spirit of the Boogie,” “Love & Understanding,” and “Open Sesame” followed. The latter’s title track was featured on the top-selling movie soundtrack of all time, “Saturday Night Fever,” earning the group their second Grammy.

In 1979, Kool & the Gang unveiled a smooth new sound with “Ladies Night.” Produced by the legendary pop/jazz musician Eumir Deodato, it became their first platinum album. The No. 1 R&B title track reached No. 8 on the Pop chart. It was followed by “Too Hot” (No. 3 R&B, No. 5 Pop). The 80s would see them dominate the mainstream, starting with the double platinum-selling album “Celebrate” (driven by the international monster hit “Celebration,” which spent six weeks atop the R&B chart and became a No. 1 Pop single).

“Celebration,” which played as the American hostages returned from Iran, remains de rigueur at joyous occasions worldwide. The smashes “Get Down On It,” “Take My Heart,” “Let’s Go Dancing,” “Joanna,” “Tonight,” “Misled,” the No. 1 R&B, No. 2 Pop giant “Cherish,” and the No. 1 R&B anthem “Fresh” (these last three from the multi- platinum LP “Emergency“) solidified the group’s international stardom.