The Who at Ruoff 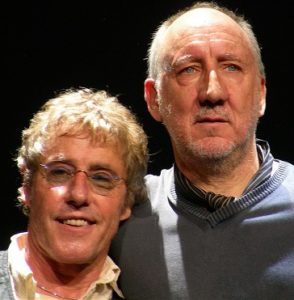 For WHO fans everywhere, the announcement of a brand new tour means only one thing:  the world’s most untameable rock band is about to deliver the goods once again. Never ones for nostalgia, singer Roger Daltrey and guitarist and songwriter Pete Townshend will be unleashing the combustible force that is The Who, with symphonic accompaniment this summer and fall in 2019.  Produced by Live Nation, The Who’s North American MOVING ON! TOUR will bring their indelible brand of powerhouse rock to 29 cities beginning in May. The kickoff date is May 7 in Grand Rapids, MI with the band wrapping up the first leg of the tour June 1 in Toronto, ON. The tour will make a stop at Ruoff Home Mortgage Music Center in Noblesville, Indiana on Saturday, May 18, 2019.

The Who are one of the top three greatest rock legacies in music history.  Their music provoked explosive change and spanned what many critics declare is rock’s most elastic creative spectrum, with Pete Townshend’s songwriting moving between raw, prosaic, conceptual, and expressively literate.  Their visionary sense of stagecraft headed by Roger Daltrey’s soaring vocal prowess is topped off by the band’s blistering rhythm section. 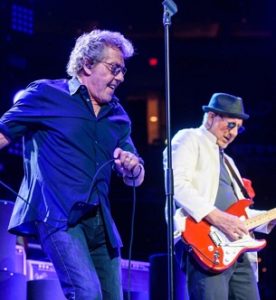 Emerging in the mid-1960s as a new and incendiary force in rock n’ roll, their brash style and poignant storytelling garnered them one of music’s most passionate followings, with the legendary foursome blazing a searing new template for rock, punk, and everything after.  Inducted into the Rock n’ Roll Hall Of Fame in 1990, the band has sold more than 100 million records worldwide, placing 27 top-forty singles in the United States and United Kingdom and earning 17 Top Ten albums, including the 1969 groundbreaking rock opera Tommy, 1971’s pummeling Live At Leeds, 1973’s Quadrophenia and 1978’s Who Are You.  The Who debuted in 1964 with a trio of anthems “I Can’t Explain,” “The Kids Are Alright” and “My Generation” Since then they have delivered to the world hits such as “Baba O’Riley,” “Won’t Get Fooled Again,” “Pinball Wizard,” “Who Are You,” “I Can See For Miles,” and, “You Better You Bet.”

In 2008, they became the first rock band ever to be awarded the prestigious Kennedy Center Honors. The Who has performed all over the world including global music events for the Super Bowl XLIV Halftime Show in 2010 and closing the London 2012 Summer Olympics.

The Who’s fan club presale starts Wednesday, January 16 at 10am local time and runs through Thursday, January 17 at 10pm local time. Every pair of tickets purchased online includes a redeemable code for a CD copy of The Who’s forthcoming album when it’s released. This offer is available to US and Canada customers only and not valid for tickets purchased via resale. In addition, $1 from each ticket sold for the MOVING ON! TOUR will benefit Teen Cancer America(www.teencanceramerica.org.)  Tickets go on sale to the general public beginning Friday, January 18 at LiveNation.com.