Twentieth century British author J.R.R. Tolkein is notable for writing “The Hobbit” and “The Lord of the Rings,” but most Americans know little of his personal life.  Now Finnish director Dome Karukoski has given us “Tolkein,” an in-depth examination of the early life of the famed scribe. 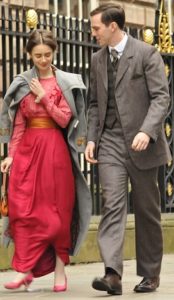 “Tolkein” begins as young John Ronald and his little brother are raised by a single mother, whose dramatic interpretations of their bedtime stories spark an interest in both literature and fantasy in the boys.  But when John Ronald is 12, his mother dies of diabetes, leaving the two boys orphaned.  At Mom’s request, Father Francis Morgan is tasked with their upbringing.  Father Francis places the boys in a prominent boarding school, in which John Ronald excelled in his studies.

He and his close-knit group of comrades are accepted into Oxford, where John Ronald meets Edith Bratt, a classical piano prodigy and the woman who would become the love of his life, and later his wife.  It is during his Oxford years that Tolkein first develops alternative languages, and shares them with Edith.  Although Karukoski’s film ends before any of Tolkein’s novels is published, we are privy to much of the development of his signature works through David Gleeson’s and Stephen Beresford’s original screenplay.  In addition to the development of language, we see young Tolkein sketch some of the artwork which would later be associated with his works.

A lot of attention is given to Tolkein’s service in World War I, during which he and his friends part ways, only to be later reunited on the battlefield.  It is during these scenes (more so than during the loss of his mother) that Tolkein becomes captivated by death – a fascination that would work its way into his novels.  For my money, the screenplay concentrates a little too much on the war years, but the war obviously made quite an impact on the burgeoning author.

As Tolkein, Nicholas Hoult (“About a Boy”) excels in bringing to life an author whose works have fascinated many readers over the years.  Lily Collins (daughter of Phil) turns in a career-defining supporting performance as the inquisitive and intelligent Edith.  And veteran British actor Colm Meany plays the stern but supportive Father Francis. 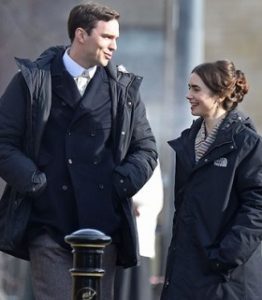 “Tolkein” is informative and entertaining.  Even those without an affection for great literature – particularly of the fantasy genre with which Tolkein is forever associated – should be taken in by Karukoski’s film.  My only wish is that “Tolkein” hadn’t ended before his writing career took off.  I would have preferred Karukoski eliminate some of the early scenes – perhaps beginning with John Ronald’s Oxford years – and then take our journey forward to Tolkein’s personal and professional friendship with C.S. Lewis, author of the “Chronicles of Narnia.”

Tolkein and Lewis were a bit of a rare breed in twentieth century literary circles in that they were devout Christians.  Much of the fantasy action in their works has been attributed to Biblical literature.  In a time when religion – and Christianity in particular – is of ever-dwindling importance to many, a film about the life of J.R.R. Tolkein would have been a prime opportunity to show how the life of Jesus influenced the writings of two of the most beloved of recent authors.  In this respect, I consider “Tolkein” a missed opportunity.

Again, there’s nothing inherently wrong with the screenplay.  “Tolkein” accomplishes what it sets out to do – introduce us to the early influences on, and musings of, a great author.  But it could have been so much more; it could have carried more weight and heft; it could have embodied an air of importance that the film, as it is, lacks.  It’s a nice early-life biography.  It could have also made a statement.