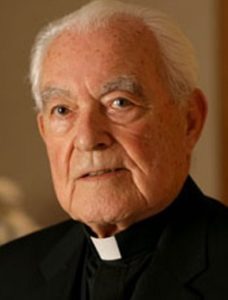 Father Theodore Hesburgh was president of the University of Notre Dame for an incredible 35 years – 1952 through 1987.  During that time, he positioned the school – known at the time primarily for its prowess in football – to the forefront of American Catholic universities.  But Hesburgh was so much more than a university president and respected priest.  He was instrumental in bringing civil rights and voting rights to Southern blacks; he was a major player in the anti-Viet Nam War movement; he was an early critic of the Nixon Administration; he was personal friends with the CEOs of many Fortune 500 companies; and he knew every U.S. president during his tenure at Notre Dame.  In short, Hesburgh was one of the movers and shakers of 20th Century America.

Now documentary filmmaker Patrick Creadon has given us “Hesburgh,” a riveting look at the life of this important American figure.  Using voice-over to bring some of Hesburgh’s written words to life, Creadon interviews a wide array of people who knew him and who studied his life, including Hesburgh’s younger brother, longtime “Nightline” host Ted Koppel, former U.S. Congressman and Notre Dame graduate Tim Roemer, former U.S. Senator Alan Simpson, U.S. House leader Nancy Pelosi, and former Defense Secretary Leon Panetta.  Coupled with archive footage of Hesburgh, these interviews give us a snapshot into the life of a man who changed the course of American history.

He began his tenure at Notre Dame by courting some of the most successful businessmen in America – and asking their help (financially) to position Notre Dame as one of the top universities in America.  By the end of the 1950s, Notre Dame was seen as affluential and important. 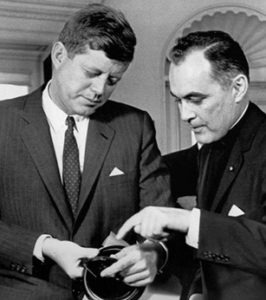 Appointed to the U.S. Civil Rights Commission by President Eisenhower, Hesburgh was instrumental in forcing the commission to reach some kind of agreement – even though Eisenhower himself created the commission merely to satisfy those longing for any movement on the civil rights front.  How did Hesburgh accomplish such a feat?  By inviting all the commission’s members to his weekly masses; and by inviting them to his favorite retreat in rural Wisconsin – to go fishing!  Hesburgh insisted a good day of fishing forced people to let down their guards, and to get along.

The commission presented its recommendations to the president, but it wasn’t until Lyndon Johnson actively twisted the arms of some of his Senate colleagues that Civil Rights became a reality in the American South.  Following his coup d’etat with Civil Rights, Hesburgh was suddenly on everyone’s short list of those who could advance progressive causes amid the increasing political and social turmoil of the day.  Much to the dismay of some in the Catholic church, Hesburgh befriended Martin Luther King, and became a leader in the burgeoning protest movement against the Viet Nam War.  During the Nixon Administration, Hesburgh became disillusioned that his old friend from the Eisenhower years was ramping up American military involvement in Southeast Asia.

Hesburgh spent almost as much time away from Notre Dame as he was present at the university.  But Creadon does an excellent job of also highlighting the way he personally touched the lives of many students.  Seeing and hearing testimonials from students who spanned the 35-year tenure of Hesburgh’s presidency is somewhat reminiscent of the final scene in “Mr. Holland’s Opus,” a fictional account of a longtime music teacher whose students reunite for his retirement concert.  It’s these personal stories that give “Hesburgh” (the film and the man) the weight it deserves.  Hesburgh was willing to forego marriage and family so that he could touch the lives of thousands of students.  And when his country called, he was always willing to give of his services.

Best documentary so far this year

This is the most compelling documentary I’ve seen since “Won’t You Be My Neighbor,” last year’s account of television pioneer Fred Rogers.  Watching “Hesburgh” is akin to watching “Forrest Gump,” in that we could never imagine one person could alter the course of history in so many ways – except that “Forrest Gump” was fiction.  “Hesburgh” is real.