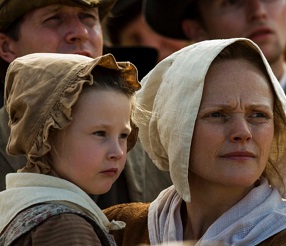 In their wake, the end of the Napoleonic Wars had left much of rural Northern England suffering from famine and unemployment.  Further exasperating the situation, London had imposed the so-called “Corn Laws,” which placed high tariffs on foreign grain – resulting in artificially inflated prices for basic staples.  As a result, an underground radical movement was gaining traction.  These reformers demanded fair representation in London, lower prices on goods, access to imports, and the availability of jobs.

Thwarted at every turn by the British ruling class, tensions finally came to a head during the summer of 1819 in what came to be known as the Peterloo Massacre – a nod to the Battle of Waterloo of four years previous.  A crowd of approximately 70,000 had gathered in St. Peter’s Field in Manchester to hear the famed speaker Henry “The Orator” Hunt – a pioneer of the working-class radical movement.  Fearing the strength of the crusade and their potential loss of power, the local British magistrates empowered the Yeomanry (provincial cavalry) to arrest Hunt.  The ire of the mostly unarmed crowd and the angst of the Yeomanry resulted in the deaths of 15, including that of a child.  About 500 were injured. 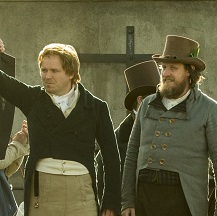 Now, two centuries after the massacre, veteran British filmmaker Mike Leigh has given us his interpretation of the massacre.  “Peterloo” stars a bevy of British television and Shakespearean actors, including Rory Kinnear as Hunt, and Neil Bell as Samuel Bamford, a well-known agitator from near Manchester.  We follow the action through the eyes of a fictional character named Joseph, played by newcomer David Moorst.

At the outset of “Peterloo,” Joseph returns from the Battle of Waterloo to be reunited with his close-knit family – his parents, sister, brother, and sister-in-law.  Each family member earns a living by providing manual labor in a local mill.  Joseph’s family is exactly that which is enticed by the growing pattern of local political meetings – during which we’re introduced to Bamford and his small band of agitators.  As the action ramps up to the final showdown at St. Peter’s, Joseph and his family take a back seat to the movement leaders and British aristocracy, only to reappear at various meetings, and finally at Peterloo.

Much as the first hour of Kathryn Bigelow’s “Zero Dark Thirty” was an increasingly uninteresting parade of investigative meetings with various al-Qaeda and terrorist informants, the middle hour of “Peterloo” serves as a tedious exercise in backroom political meetings, in which the crowd sizes increase and the rhetoric becomes progressively more combustible – but the plot of the film stagnates.  This middle third of “Peterloo” could have been trimmed substantially without losing sight of the mission of the film.

Furthermore, the idea of Moorst’s Joseph is to provide the eyes through which we observe the action of “Peterloo.”  He and his family are exactly the target audience for Bamford, Hunt, and the movement leaders.  In other words, Joseph is essentially the film’s narrator – without actually narrating anything.  But I cannot recall a less engaged or compelling narrator in the history of film.  Joseph mopes about with a look of bewilderment and utter indifference to anything going on around him.  As Joseph’s father Joshua, veteran British actor Pearce Quigley offers a far more coercive set of eyes through which to view the proceedings.  Unfortunately, Leigh forces us to watch the action through Joseph – and that’s a fatal mistake.  This guy is boring!

Ending is a letdown

Coupled with the film’s exasperating two-and-a-half-hour running time, the massacre itself is a letdown.  With so much build-up, we’re expecting a battle extraordinaire.  But instead, the final ten minutes plays out like a coda to an expose on how to organize a proper labor movement.

I’m sure the Peterloo Massacre has an important place in the history of political and social upheaval.  Preceding the publication of Karl Marx’s “Communist Manifesto” by almost three decades, Peterloo was certainly an early chapter in the power struggle of the working class.  Retelling such a story might have made for an interesting hour-long public broadcasting production.  But as a feature film – and a long one at that – it’s easy to lose interest.  Mike Leigh is one of Great Britain’s best active directors.  His recent films “Happy-Go-Lucky” and “Another Year” were excellent.  Unfortunately, “Peterloo” is not.